Discarding my sunglasses as I retreat within a converted railway carriage cabin, snow-capped mountains are tinged a dusky pink. Above, the cloudless sky is the gentlest shade of violet reflected in the mirror-like water of Kachemak Bay. Reluctant to block out the barely there twilight, pointlessly I draw the thin curtains and hop into bed. A week short of Summer Solstice in Alaska, it’s close to midnight and blindingly bright for sleeping. Midway through the three months when the sun barely sets, it takes some getting used to. Each night I force myself to go to bed despite it being almost daylight outside. It’s easy to appreciate how Alaskans rejoice in summer, taking full advantage of never ending days beneath the midnight sun. These high latitude anomalies add to Alaska’s mystique, separated geographically, culturally and spiritually from their southern USA countrymen. 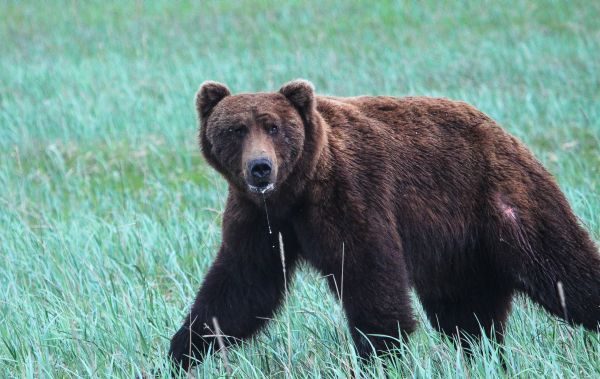 Some Alaskans, like Morgan McBride, whose family run Kachemak Bay Wilderness Lodge across the bay, laugh about how they do the ’90 day sprint, working almost non-stop from June to August’. Others like the young guide who takes me bear viewing from a boat on Big River Lakes, drops me off around 11pm then spends the rest of the night fishing (with no need for torches), before rocking up for work again around breakfast time, sans sleep. Summer is not a time for sleeping in Alaska: there’s ample time to rest up once winter darkness descends.

Indeed my lakeside cabin at Redoubt Day Wilderness Lodge rather oddly comes equipped with no lighting at all beyond a low wattage light over the bathroom mirror. With a couple of large picture windows facing south and west, it turns out to be all that is required to flood the bedroom with natural light no matter the time of day. As the lodge is only open during summer it’s a natural solution to lighting in this remote wilderness area at the foot of the Chigmit Mountains.

I’d timed my visit to the lodge, almost an hour south of Anchorage by float plane, to view wild black bears. Exploring mostly by small punt, we saw plenty, including a couple of sows with spring cubs in tow. By late June the lakes are filled with salmon migrating to spawning grounds in the upper lakes beneath summer-melt glaciers. Alaska’s state fish, chinook (otherwise known as king) salmon are the largest, but sockeye are the tastiest, highly prized by both humans and bears. Black bears salivate by streams, ready to snatch salmon mid-air as they ‘pool hop’ to upper lakes. Fishermen lure them onto their lines as the salmon group in schools before making their dash for spawning grounds. 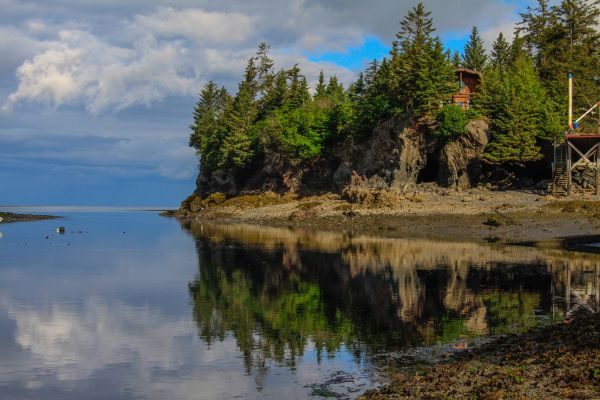 A love of salmon is a common thread across Alaska with five species inhabiting Alaskan waters: chinook (known as king), pink, sockeye (red), coho (silver) and chum (dog) salmon. In 2010 commercial fishermen harvested 169 million of them. Or, to put it into perspective, around 230 salmon for each Alaskan resident.

Affectionately known as the Halibut Capital of the World, the seaside village of Homer is not a bad place to indulge in Alaskan seafood. Looking a little like flounder, halibut flesh is sweet and full of flavour, best served simply with a squeeze of  lemon and a dash of cracked pepper. Though with Alaskan’s penchant for deep frying or coating everything in a rich sauce, it’s actually rather difficult to find a restaurant showcasing this abundance of seafood to its full potential. Much like Alaskan coffee which comes black and strong. Or stronger still. Take it or leave it. Alaska is no place for shrinking violets. Which is mostly its main attraction, with a dramatically beautiful landscape populated by characters straight out of the TV show The Deadliest Catch. 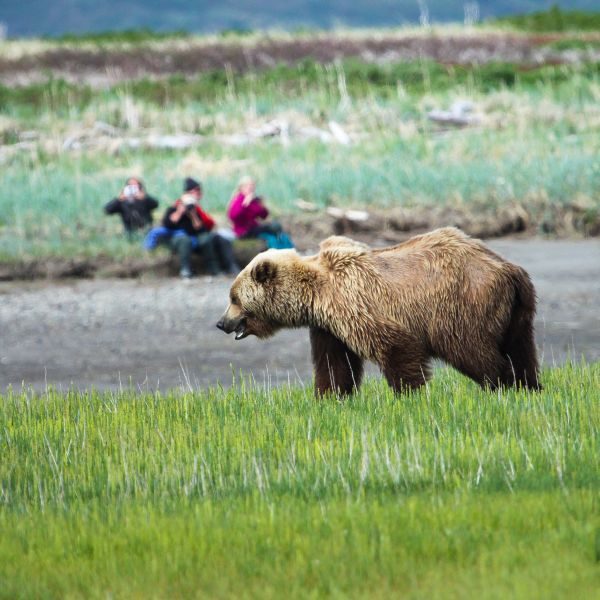 Taking the Marine Highway, which is really a fancy name for a long distance ferry, I board M/V Kennicott from Homer bound for Kodiak. Despite running almost nine hours late, the extended delay gives me an opportunity to poke around colourful galleries, alfresco cafes and the infamous Salty Dawg Saloon on the Homer Spit.

The nine hour cruise to Kodiak passes quickly and comfortably in a twin bunked cabin with its own bathroom. Because of our late departure we arrive at Kodiak in the early hours of the morning rather than early evening as intended. But it’s no great hardship as there’s plenty of diversions once on board. I wander the decks watching mountains slip by as we steam southwards, grab a snack in the cafeteria followed by a drink in the bar before slipping into bed.

Again, drawing the curtains seems a little pointless as the midnight sun streams through panoramic windows all night. But I’m grateful for my bed as I see others bunkering down in sleeping bags on the floor, spread across seats in the lounge or curled up on sun lounges on deck. Others still have erected their own tents on deck. Tenting on the Marine Highway is almost a rite of passage, a sort of threshold between the pesky rules of the Lower 48 (as the rest of the USA is known to Alaskans) and that unhindered sense of Alaskan freedom. Despite basking beneath softly filtered honey-hued light, Alaska can be a little rough around the edges. But don’t let that stop you from visiting: it is one of her greatest attractions.