The blue painted line blending into the irregular cobblestones marks the shortest route through Paris’ historic streets. The line, though itself only temporary, passes some of the most significant historical sites in Paris. From the shadows of the Arc de Triomphe, where the Tomb of the Unknown Soldier rests in an underground vault, the line snakes along the Champs Elysees. At the bottom of one of the world’s most famous avenues, with the aptly named Grand Palais to one side, the blue line rounds the Place de la Concorde square, the site of Louis XVI’s execution by guillotine in 1793. It passes the 12th century building housing the Louvre Palace Museum before heading eastwards around Place de la Bastille. Here the July Column commemorates events during the French Revolution. All that history within the space of 5 km. 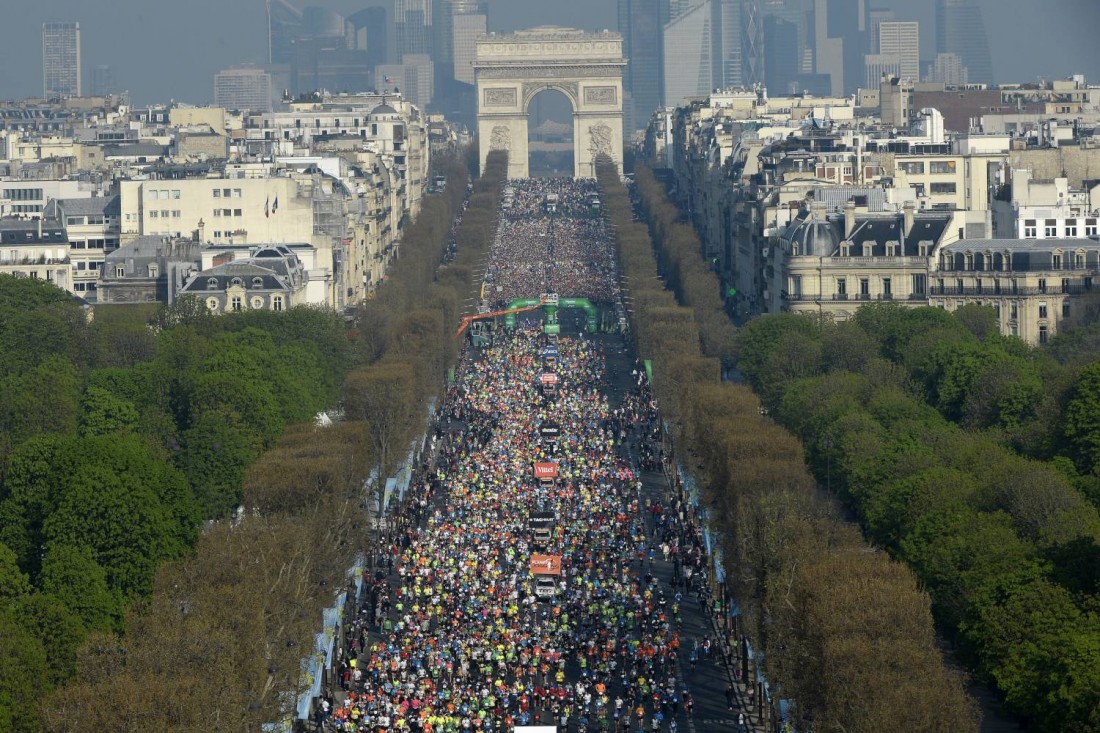 Paris Marathon attracts up to 50,000 runners

Most visitors to Paris are barely aware this blue line exists. It’s understandable given the extraordinary distractions, with most preferring to linger leisurely, soaking in the ambiance of Parisian streets. Ducking into bespoke boutiques, pausing over a coffee street-side. Basking in spring sunshine in the park beneath the Eifel Tower sipping wine, devouring sumptuous cheeses. Admiring architecture, contemplating history and appreciating important artworks, Paris’s charms are boundless. Being on a tight schedule however, my sightseeing time is fast-tracked. Ideally, I’ll limit it to around four hours if all goes according to plan. Less than six if things go pear-shaped. Running 42.2 kilometres throws up plenty of challenges so there’s always an element of the unknown lining up at the start line. With a torn hamstring hampering training, I’ll be happy just to cross the finish line. Today my time is irrelevant it’s all about soaking up the atmosphere.

Along with 40,000 other runners participating in the Paris Marathon (I could say competing but that would be over-stating my abilities), the blue line defines our route over the marathon distance. Not everyone will finish, their marathon dreams deserting them enroute like rats from a sinking ship. Some, like the eldest 86 year old competitor, will be aiming merely to finish, the reward a coveted finishers medal and much self-satisfaction. Though there’s plenty of nubile young things in tight shorts and even tighter tees, it’s reassuring to see numerous Masters and Veterans, some sporting Aussie flags on their shirts. There’s a curious pride in travelling so far to run one of the four Great Marathons (the others are Boston, Berlin and New York). Major events such as these are attracting mature fit travellers in ever increasing numbers across the globe – Paris Marathon sold out months before the April event. With the fashion police unusually conspicuous by their absence the Champs Elysees is a trembling mass of twitching iridescent lycra. Men are peeing into plastic bottles, discarding them in rubbish bins. Women line up five deep outside too few portaloos. The excitement is palpable. I’m nervous and  hoping like crazy my hamstring will hold out for as long as it needs to. 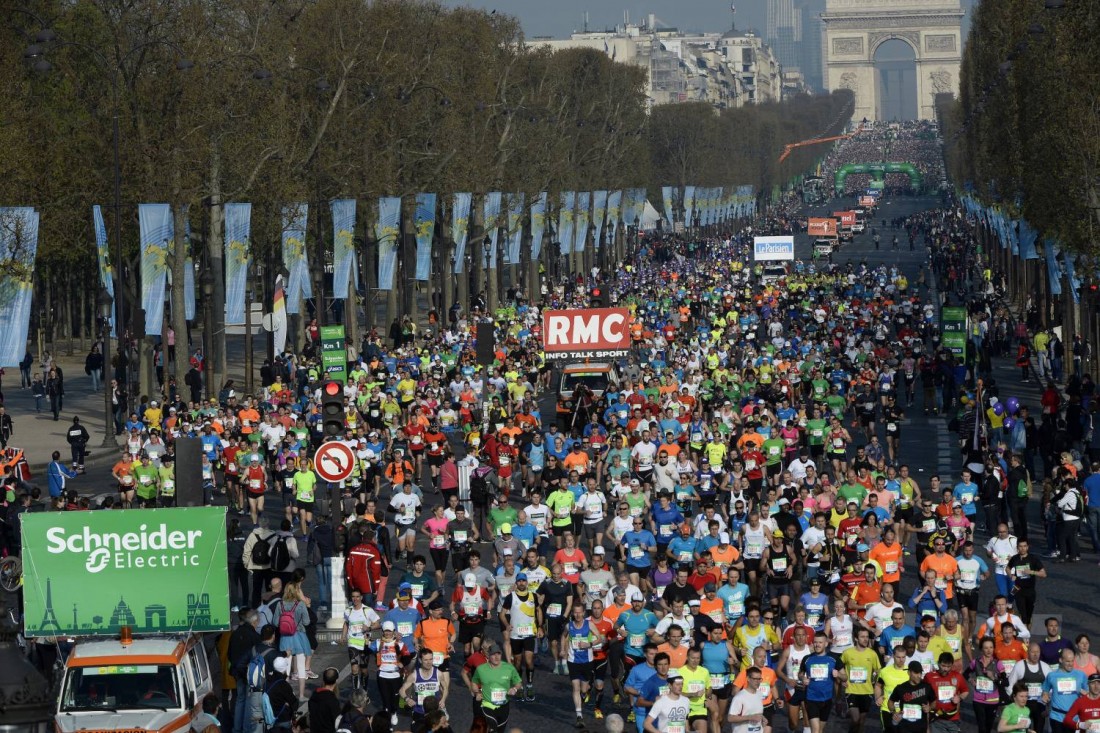 Along the length of Paris’ prettiest streets bands and performers keep the atmosphere festive. There’s jazz, rock and blues. Samba and soul. Heavy metal guitar riffs clash with a delicate classical flute at one point. But it matters little. Onlookers dance and sing. They laugh and chat while eating and drinking, pausing briefly to applaud runners, but mostly they’re there for the street party. By the time we reach the turnaround point and leave the Bois de Vincennes, the ‘lungs of Paris’, behind, we’re almost halfway. In the distance the Eiffel Tower is bathed in sunshine, piercing a cloudless blue sky. My hamstring is tighter than a guitar string. I only hope it doesn’t ping like one.

With the River Seine on our left the Cathedrale of Notre Dame dominates the far bank. Then there’s the Musee d’Orsay before we lose our view of extraordinary riverside sites, descending underground for a few kilometres. The atmosphere is electric as Abba’s Dancing Queen rebounds off the Pont de l’Alma Tunnel walls at a gazillion decibels. Temporarily closed to traffic, the tunnel has been transformed into a throbbing disco. Coloured laser lights bounce peculiar patterns that reflect in a twirling mirror ball suspended from the tunnels roof. It’s much later that I realise this tunnel was the same one that claimed the life of Princess Diana 17 years prior. 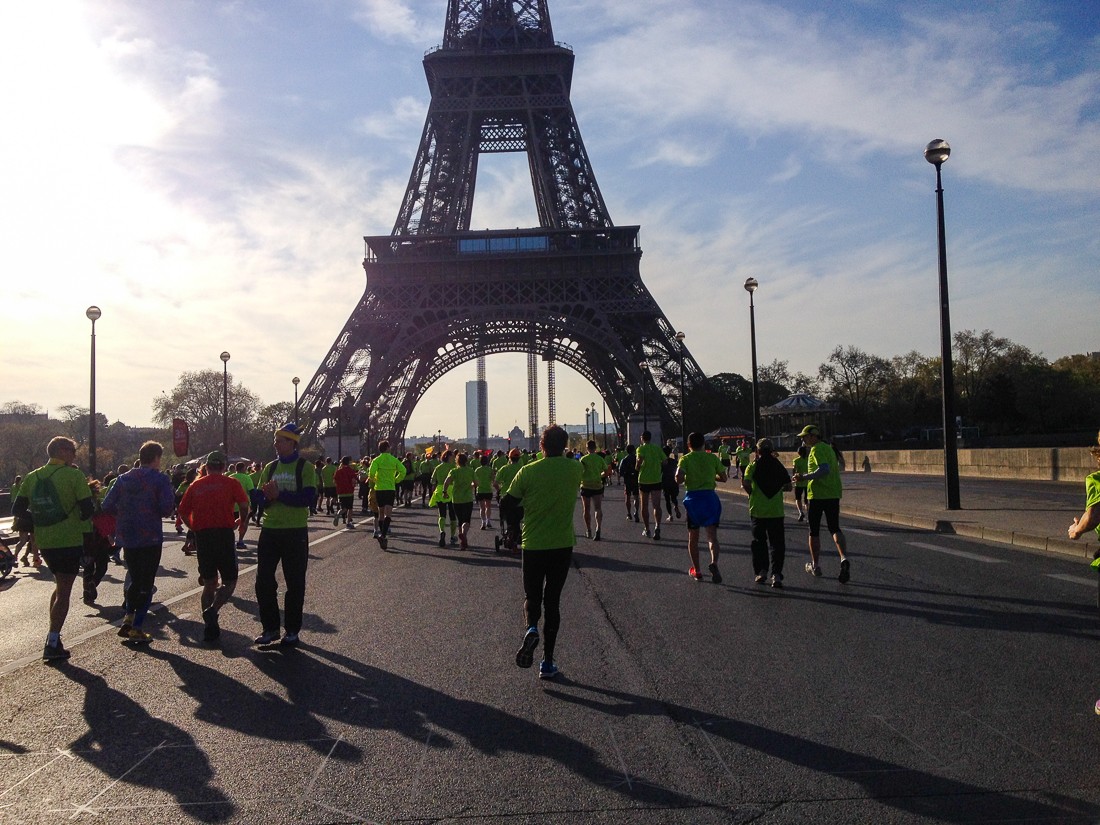 Popping back out into the sunshine the Eiffel Tower is suddenly larger than life. Running close by this icon, unexpectedly I choke back tears as the reality of my surroundings almost overwhelms me. Emotionally vulnerable, it’s no help that we’re approaching the crucial 30 km mark, where many say the real marathon begins. Now it gets tough. I can barely hear my hamstring screaming over the streetside musicians. The party continues unfettered amongst spectators as fatigue defines blue line devotees.

Spanish tennis legend Rafael Nadal provides a mental boost as we circle Roland Garos Stadium. Having watched him dominate the red clay for a record nine times, I channel some of his Latino passion to knock back the final few kilometres. It’s just the mental lift I need to regroup . My shuffle reverts to a confident trot when I finally hear the finish line announcers voice above the crowd.

Exhausted yet exhilarated, stretched physically and emotionally, the blue line, which will disappear entirely in a few weeks, finally terminates on cobblestones shaded by the striking Arc de Triomphe monument. Honoring those who fought and died in the French Revolution and the Napoleonic Wars, the surrounding carnage of runners blistered, bleeding stumps pales into insignificance. My own legs are barely functioning, my hamstring having held itself together though. My time is shite but it matters little. I’m done. Clutching my coveted finishers medal I can’t help but admire Parisienne passion in putting on such an extraordinary spectacle every April for the past 37 years. Vive la France. 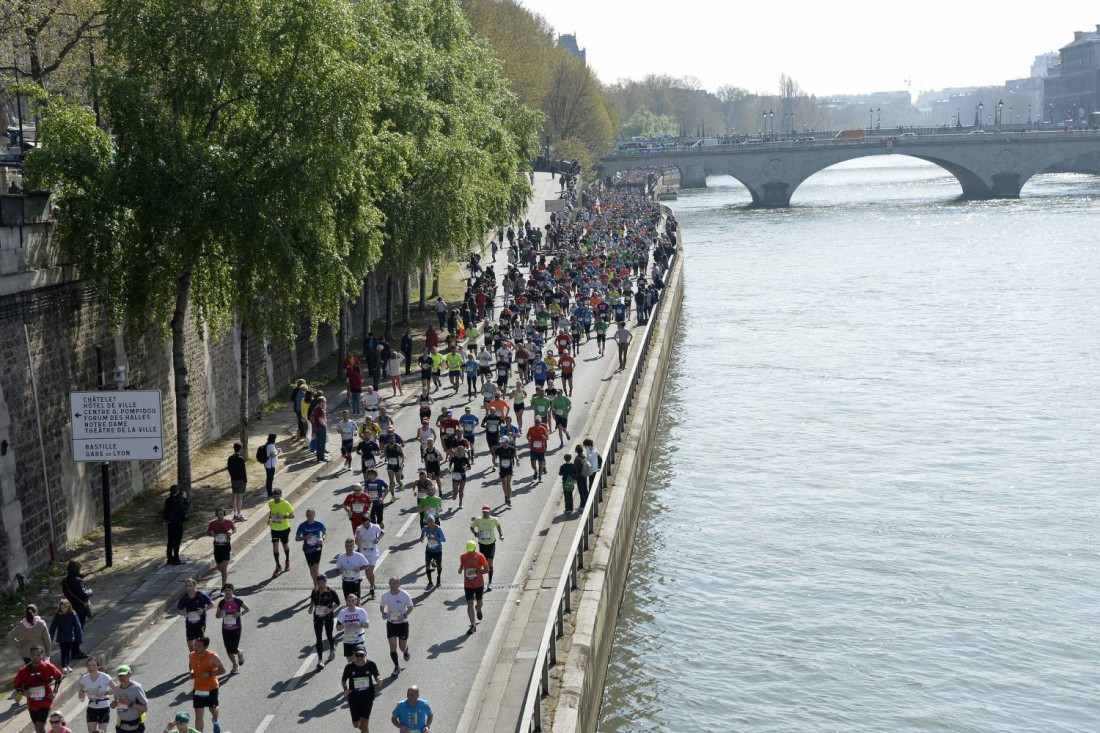 Want to enter Paris Marathon? Entries are capped at 40,000 and sell out well in advance of the April event 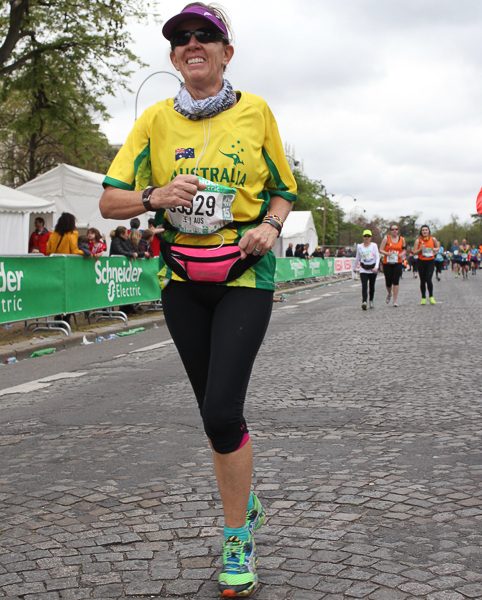 Running the cobbled streets of Paris was never going to be easy. But the rewards were immense.