Submerged with Cage of Death crocodiles 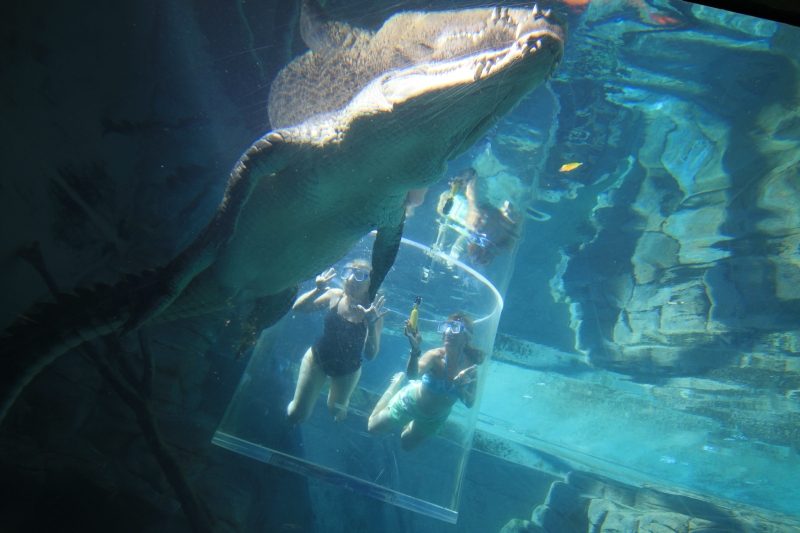 50 millimetres is all that separates me from the jaws of Australia’s most opportunistic predator, the world’s largest and most dangerous reptile. A saltwater crocodile weighing in at a hefty 900 kg, Axel is 5.1 metres of terrifying reptilian testosterone. He’s also a seasoned performer with all the right moves. I’m equally fascinated and petrified. Not for the first time I wonder about my own sanity before stepping into a saltwater crocodile enclosure at Crocosaurus Cove in downtown Darwin. 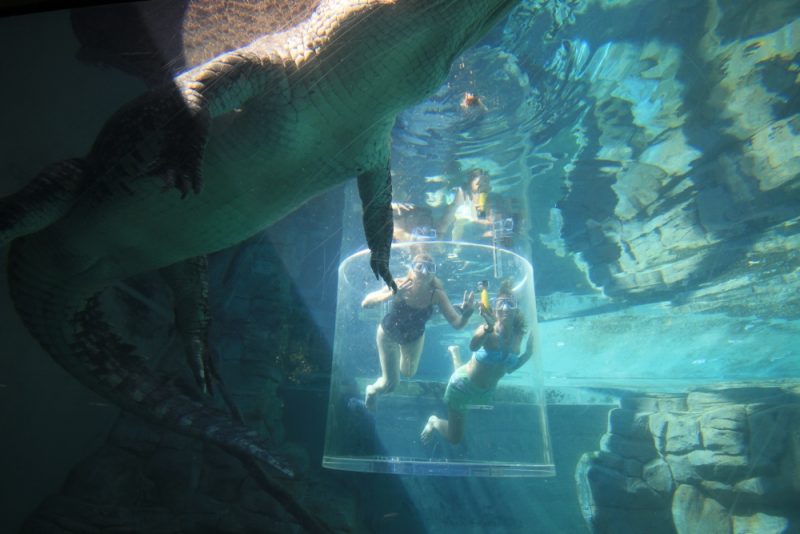 Axel hovers on the surface eyeballing Angela and myself as we don snorkelling masks and drop down below the surface. I almost shit myself and squeal like a 10 year old at a Justin Bieber concert. We’re sharing the same water! He hovers about a metre away, his beguiling crocodile grin leering back at me. Deep caramel coloured eyes glint in the sunlight. From my plastic sanctuary I peer through the slit in the perspex, admiring his magnificence while cowering in fear. With a gentle swoosh of his tail he edges closer, a tempting morsel of meat dangling between us. He turns his nose up at the meat and glares our way. I suspect he’s far more interested in devouring Angela and myself but the park guide controlling our destiny hoists us out of the enclosure before we test that theory. 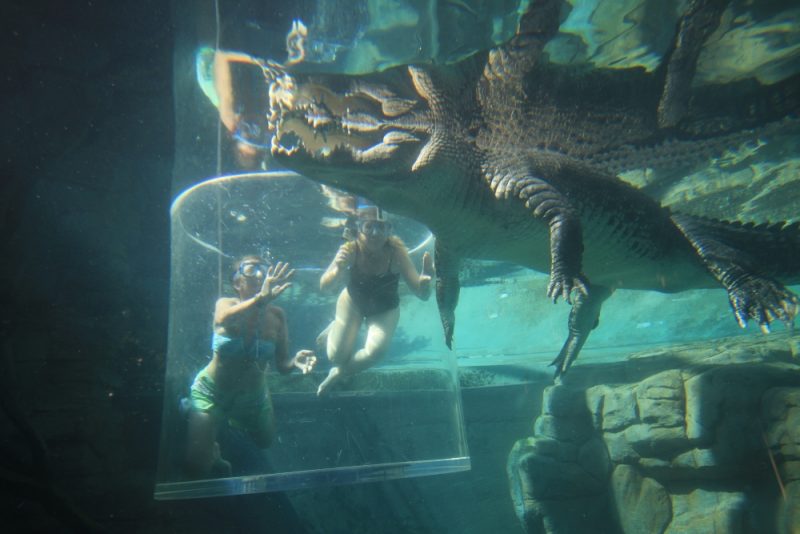 We’re lowered into the pond inhabited by the parks breeding pair, appropriately named William and Kate. Kate’s unimpressed by our arrival but William perks up as soon as we descend. He’s not as big as Axel but is every bit as fearsome, being a fertile male in the prime of his life. If he was capable of  a wolf-whistle that tradies on a building site excel at, well, I reckon he would let one rip. Fuelled by the sort of testosterone that causes mayhem in the lap dancing club down the road, he struts and poses before making a bee line for Angela and myself. I’m flattered at the attention, but usually prefer a little less overt lust in my men. And I’m not a big fan of an overbite of which William has a severe case.

William however is on a roll. With bashful Kate hovering nearby, tail between her legs and momentarily forgotten, he sets out to impress. He gnashes his jaw and flashes his teeth. His tail slides past the plastic and I’m tempted to poke my fingers through the hole and touch him. When he launches himself from the water and knocks our cage my heart almost jumps out of my chest. I hysterically gulp down mouthfuls of water and nearly drown. William nudges in close and Angela leans forward to reward him with a kiss, 50 mm of plastic the only thing preventing their lips from meeting. She almost goes into coronary arrest when a piece of meat diverts his attention and he snaps his jaws shut around it inches from her head, rejecting her attempts at intimacy. 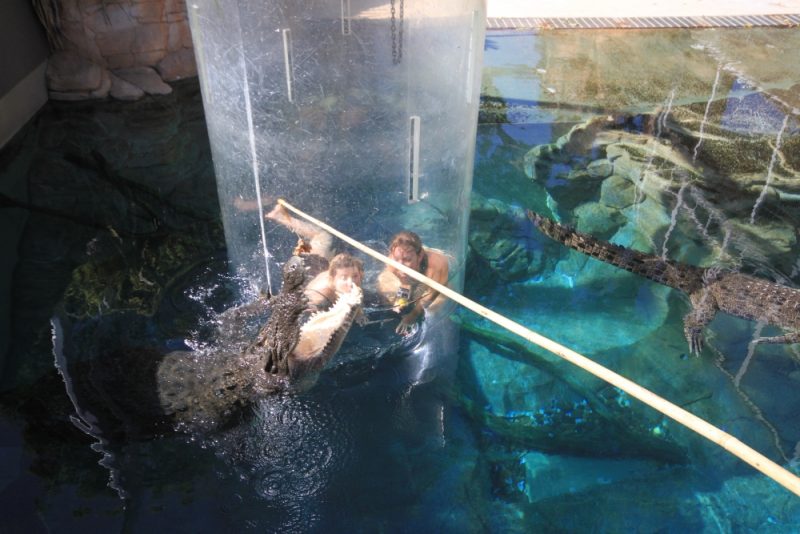 Nearby film star Burt looks on, no doubt still reminiscing about the moment he launched himself out of the swamp, snatching the water bottle from around a startled Linda Kowlowski’s neck in the film Crocodile Dundee.

I’m not quite sure where the ‘death’ part of the experience comes into the Cage of Death equation but we’re relieved to have survived the encounter. I’ve always had a hefty amount of respect and awe for this apex opportunistic predator. Breathing the same air, paddling the same water has changed none of that. My fear is affirmed. Crocs rule.

Seeing crocs is high on our wishlist when we visit northern Australia, which we want to do in the not-too-distant-future. But we’d thought we’d see them from a boat. This looks like quite the up-close-and-personal encounter. Have to think about this :-).

There are opportunities to see crocs in the wild and in parks – either way they’re not to be messed with. This was pretty cool (and scary!) fun – you won’t get this close to them anywhere else. Fiona

Wow. Fiona. You are one cool dude

Ha! I’ve wanted to do this for a while so was thrilled to get up close to these monsters