I’m the first to admit I’ve little clue about mountain biking. Collecting my swanky new bike (a Specialized Camber 29er for those who care about such details) a week before signing up for the three day Sani2c stage race in South Africa  and six weeks before confronting our first mountain, I’m full of optimism and self-confidence.

‘All mouth and trousers’, was how one rider later described such bravado.

Don’t you just throw your leg over and keep pedaling, I thought? Sure, the Sani2C stage race is nearly 300km of off road terrain but it can’t be that difficult I figure. After all I’ve been riding bikes since Father Christmas deposited my first Malvern Star beneath the tree midway through last century.

But there is a little bit more to mountain biking as it turns out. Regrettably I’ve no idea of the difference between a crankset and a cassette. Nor the more obvious (to some) connection between headset and handlebar. I couldn’t spot a busted derailleur if it slammed into my derriere. Which it’s unlikely to do unless everything goes horribly pear-shaped and I find myself face-planted, kissing dirt. Actually, come to think of it, that’s a very real possibility. Finding myself sharing planes, buses, hotels, tents, trails and single track with 13 mountain bike enthusiasts for the best part of two weeks, I’m innocently ignorant. Mostly I keep my mouth shut. Absorbing the enthusiastic chatter around me I figure it’s best to remain silent and be thought a fool rather than to contribute to the conversation, thus removing all doubt. 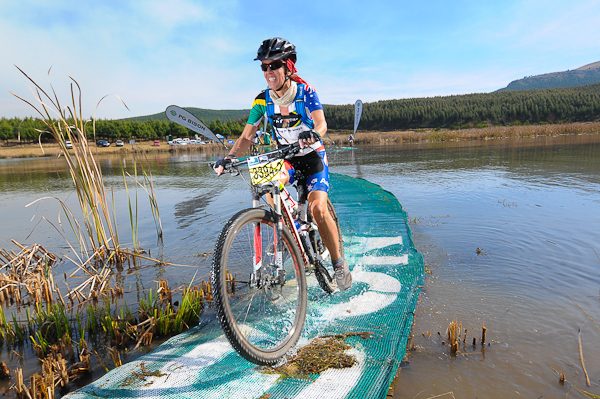 “What tire pressure are you running?” I hear someone behind me on the bus ask one day. The conversation goes on in depth, discussing the merits of tire pressure related to varying terrain, whether it matters having different pressure in front and rear tires, delving into tread profiles and rim stiffness, brakes and bearings. By the time talk has moved onto fork flex my eyes have glazed over and the only part of the conversation that makes any sense is when it drifts to more familiar forks. Watching the South African landscape roll by the bus window I idly wonder when our next meal will be. I run a mental check over my own bike and quickly realise that all I know about its wheels are that they are round and slightly knobbly. Oh, and that I’m ‘running tubeless’. Other than that I’m clueless.

As I said, best to remain silent. 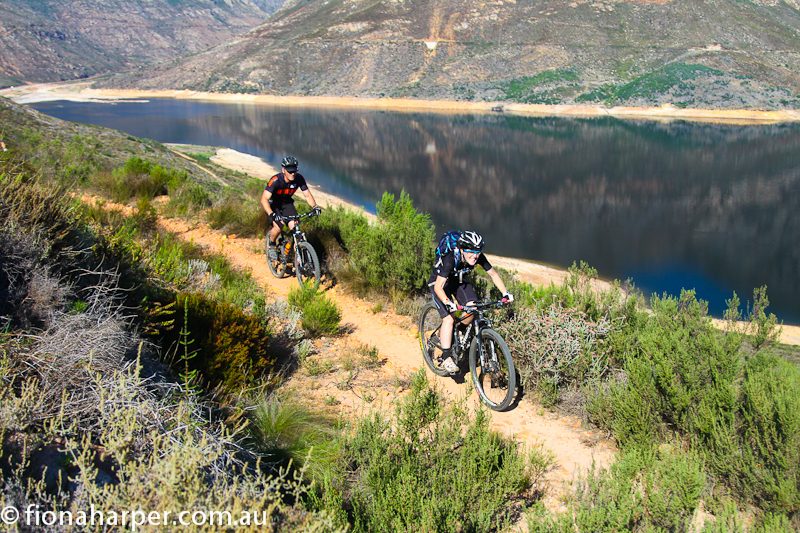 Thankfully, mountain bikers are a forgiving lot who mostly seem delighted to share their sport with newcomers. Participating (I could say competing, but that would be over-stating my abilities) in the Sani2c Trail race, some of our group have been preparing for this adventure 18 months. Others, like me, are a late inclusion after another rider pulled out. Though few are as seriously under-prepared for three gruelling days in the saddle as I am. Organiser Paul Reid has cannily drawn together Aussie friends who share his interests in charitable work and mountain biking beneath the Sani2c Oz Tour banner. Working in cohorts with Hearts of Hope in Johannesburg, the group has raised funds to build a classroom at Emseni Pre School in Kwa-Zulu Natal. At the time of writing over $36,000 had been raised, which is a significant contribution in a country where the government struggles to educate an ever increasing population, both legal and illegal.

On a sun-drenched autumn day that reveals the Drakensberg Mountains draped in a fresh dusting of snow, our intrepid group sets off to paint the walls of the newly constructed classroom. But not before they’ve carved up the trails around Montusi Mountain Lodge. Restricted by deadline demands, my bike remains firmly stashed in its bag while I stay at the hotel working. In some ways I’m also relieved at not having to reveal my lack of skills on the bike.

But Montusi is a mere teaser to the main event which starts a few days later in the high country at Underberg. Experts will tell anyone who cares to listen that when preparing for an endurance bike event you should spend time in the saddle. Lots of time. Though I didn’t bother thinking too much about this sage advice prior to flying to South Africa, in my post-race self-debrief later it occurs to me that I can count the number of times I’ve ridden my bike on two hands. With many fingers to spare. But still, I’ve been training for a marathon for the best part of a year so I’m not concerned about my endurance or fitness. 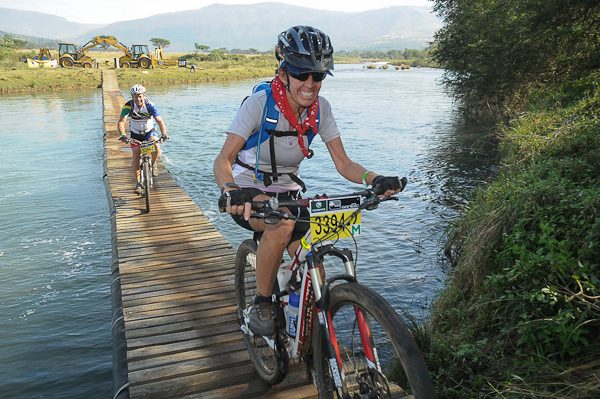 I am however, seriously threatened by an imposing mountainous landscape we’ll be biking through. Riding as part of a two person team I’m also concerned that I’ll let my team mate John Bonnett down. Bonding over champagne in the pre-departure Qantas lounge a few days back, I’m relieved to discover he has few aspirations of a podium finish, even fewer illusions on the concept of racing our bikes across rough terrain. We’ll get on ok.

Despite our casual approach, over almost 270km we ride hard. We climb (and admittedly, push) uphill and we careen exhilaratingly downhill. Through orderly pine and eucalypt forests or sashaying sugarcane we relish the cool shade. Slogging across sun-parched fields and bushlands or weaving through cows marching to milking sheds our skin bakes beneath endless African skies. Mud streaks our legs, clogs our chains, coats our sunglasses and lodges in our hair. Chafe combines with sweat to create havoc in intimate bodily crevasses. Bloated with hydrating fluid and buzzing with gel-induced euphoria we start early and finish late. Sunburnt, filthy and exhausted mostly sums up each day. So too laughter and jubilation. It’s also hellishly scary and bloody hard physically. 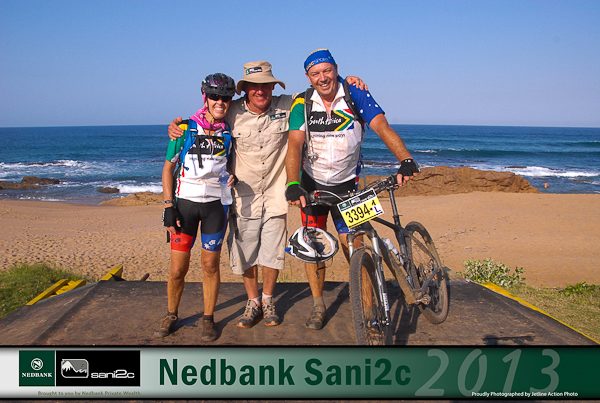 Midway through Day 1 I secretly hope for a serious injury, swearing I will never, ever ride anywhere again. But then I recall having similar crazily unfounded thoughts on completing my first half marathon. By the time the final intimidating bridge on Day 3 floats into view and the Finishers Medal is hung around my neck, I’m already optimistically planning my next ride.

Fiona Harper travelled as a guest of South Africa Tourism

We hope you’ll be back – there’s so much more to see and do – we’ll lay out another red carpet for you – or green/brown track! Well done
Jill

I’d love to return Jill, South African’s sure know how to welcome visitors, the friendly vibe on the track was amazing. Fiona

Hi Fiona. Congrats on the ride, but more importantly thank you for your contribution to SA and the youth, we really appreciate it. Sounds like you guys raised a lot of money for the school, that is amazing. Cheers.

Thanks Damian. The Sani2c Oz tour have done an amazing job fundraising – I cant take any credit for all the hard work that went into it before I came onboard. But I’ll pass your message on to the team, I know they will appreciate your sentiments. Fiona

Awesome article, Fiona! What an experience! Congratulations and thanks for sharing.

Thanks Leah for stopping by to read it – the race was quite an experience, for sure. Fiona

Great article, I enjoyed reading it and reliving the event and the trip. It’s all about making memories and making a small difference. Thanks

Great memories yes – thanks for stopping by for a read. And for sharing the experience. Fiona

I can only admire your grit and determination for finishing the Sani2C with no training (or maybe fools rush in where angels fear to thread). I was in a similar predicament of undertraining due to a late request to be someone substitute partner, but the event was worth every single second!! Hope to see you back next year and fantastic effort with the fundraising and support.

Thanks Jaco for your support, grit & determination are great buddies in endurance events! Fiona

A great article! it was a pleasure sharing it with you!!

The kind of extraordinary experience 14 Aussies will always share ;-). You can be very proud
Fiona

This is a great story! Thanks for sharing your biking adventure from RSA

Thanks Pete – I had almost as much fun writing this as I did riding. Fiona