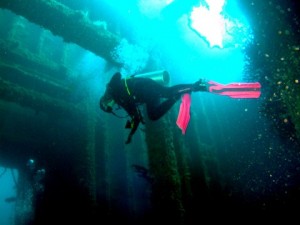 Sailing to Espiritu Santo and dropping anchor in the clear waters surrounding Aore Island, I’m reminded of a previous visit to Vanuatu. Back then I was travelling with a buddy who was determined to spend her holiday diving one of the most famous WWII wrecks. A wreck divers dream, some say it is the dive of a lifetime. It’s also one of the largest most accessible wrecks. To get a really good look at the former luxury liner and all her first class treasures, scuba junkies say you should do at least ten divers on the SS President Coolidge.

At the time, my friend was very, very excited.

I was less than thrilled.

I was harboring a guilty secret I’d kept from her as we learnt to scubadive around Rottnest Island. Diving deep into the eerie darkness of a bottomless ocean scares the living breath out of me. I’m absolutely petrified at submerging myself into what I imagine as the inky blackness that lies in the deep dark depths. A shallow dive, where I can glance up reassuringly and see the comforting sunlight penetrating the surface, causes me little grief. However descending below the magical 20 metre mark, my mind switches into a different plane and mild panic sets in.

Trouble was, the Coolidge is a deep dive. With her skywards pointing bow emerging from the depths at around 25 metres she presented a real problem for me. Known amongst divers as Vanuatu’s first lady, ‘The Lady’ is an intriguing porcelain relief of a bewitching Elizabethan woman, her elegant arms outstretched in front of a rearing horse. Originally mounted above the bulkhead fireplace of the first class saloon, in 2000 she was relocated nearby to a more secure location. Other treasures like the cargo holds are accessible only to very experienced divers prepared to plumb the depths of the Pacific Ocean to 60 metres. That’s not me.

Established as a military base during WWII for US troops, the coastline of Espiritu Santo is littered with enticing wrecks, many of them easily accessible to scuba divers from the shore. The Coolidge, sequestered during the war for military service as a troop carrier, struck what today we oxymoronically call ‘friendly fire’, hitting two mines as she steamed into Segond Channel. In a courageous endeavor to save the vessel, the Captain ran the ship aground on the beach, with some troops simply stepping ashore. Unfortunately the ship soon listed heavily onto her port side, slid backwards and sank into the channel where she now rests.

Million Dollar Point is another favorite wreck dive, where army personnel simply bulldozed civilian construction equipment into the sea at the end of the war. Now, both divers and snorkellers come to enjoy the astounding coral gardens that have grown amongst the submerged trucks and bulldozers.

But not all the treasures of Vanuatu are below the surface. The archipelago nation comprises 83 islands, attracting scores of yachts each year, driven by the south east trade winds on the cruising route across the Pacific Ocean. The archipelago stretches roughly north south over 900km. New Caledonia is her closest neighbor to the south, Fiji is to the east and the Solomon Islands lie to the north, putting her smack bang in the middle of the Pacific’s best cruising grounds.

Dropping anchor in the clear waters of Segond Channel, the scene beneath our yacht was aquarium- like. With astounding clarity, almost as though the seawater didn’t exist, the sandy bottom was dotted with coral bommies, brazenly-coloured tropical fish darting between coral fronds gently swaying in the current. Donning my snorkel and mask I slipped over the side, hovering on the surface observing the mesmerizing underwater life.

Climbing back onboard, I wondered how The Lady was enjoying her new location onboard the SS President Coolidge just across the channel. I hoped her elegantly embroidered pink gown was still as evident as it was the day I viewed her close-up, and that coral hadn’t concealed her voluptuous curves. Fondly, I recalled the Luganville barman, who upon hearing we had come to dive the Coolidge, whispered conspiratorially to follow him as he walked from the bar. Taking us to a weathered, corrugated iron shed, he ushered us into the cool darkness.

Astonishingly, in a backyard in Luganville, The Lady lay on a concrete slab in a tin shed, awaiting her imminent return to the depths. With fortuitous luck our visit had coincided with The Lady’s unexpected return to the surface. Divers had raised The Lady from her once salubrious surroundings for the first time in 58 years, after she had fallen from her original mounting. A woman approaching her sexagenarian years, she would benefit from discreetly beautifying nip and tuck restorative work.

We admired her curves up-close, without the trouble (nor the terror, in my case) of donning cumbersome scuba gear. While my friend was disappointed she wouldn’t see The Lady emerge through the murky depths, I was elated. My secret intact, I decided not to dive the Coolidge after all. Having experienced The Lady’s charms without a glimmer of apprehension, I was a very contented scuba diver.