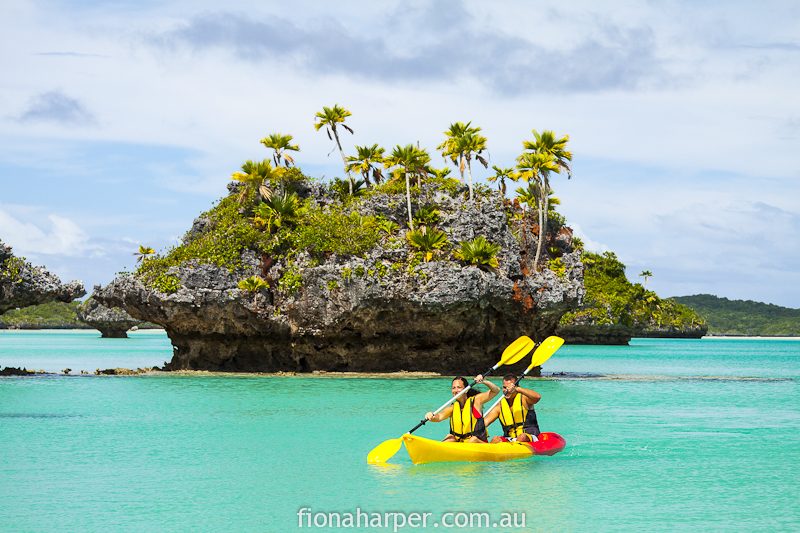 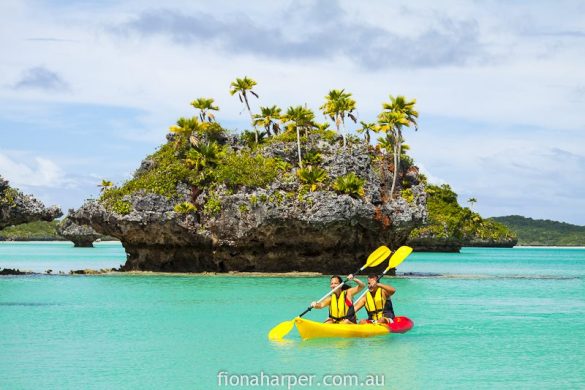 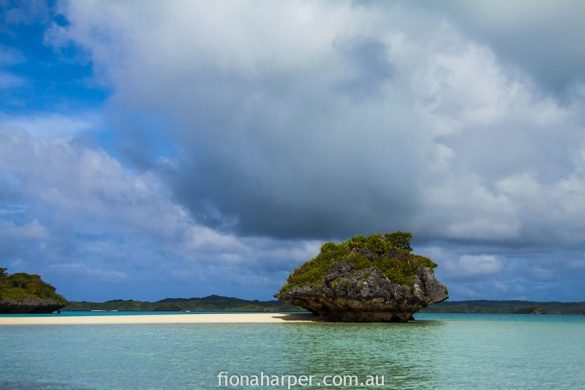 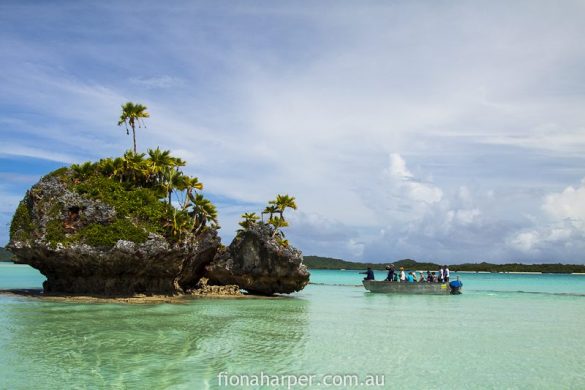 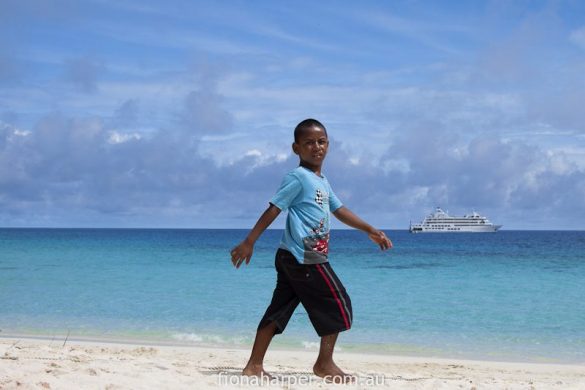 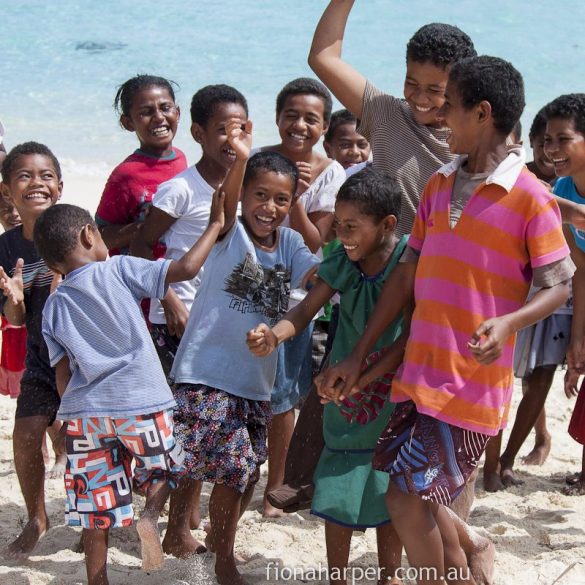 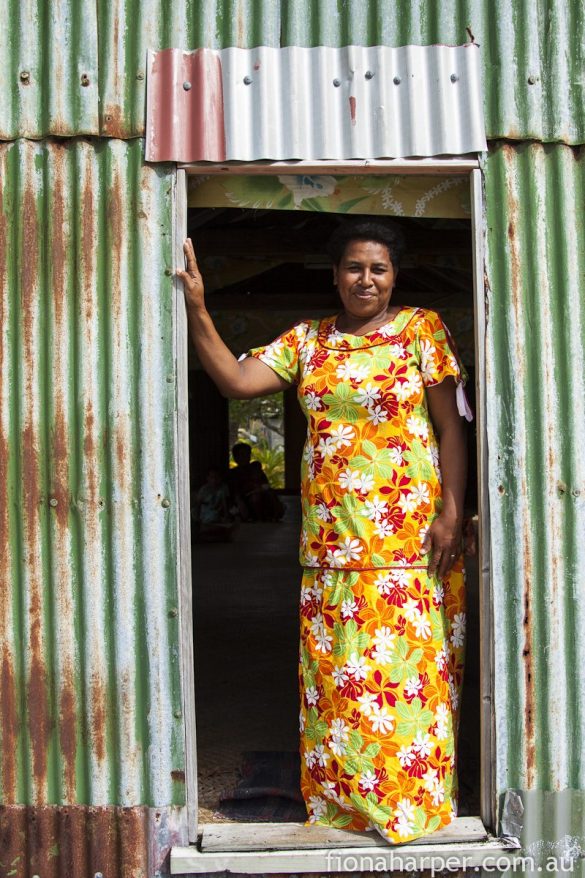 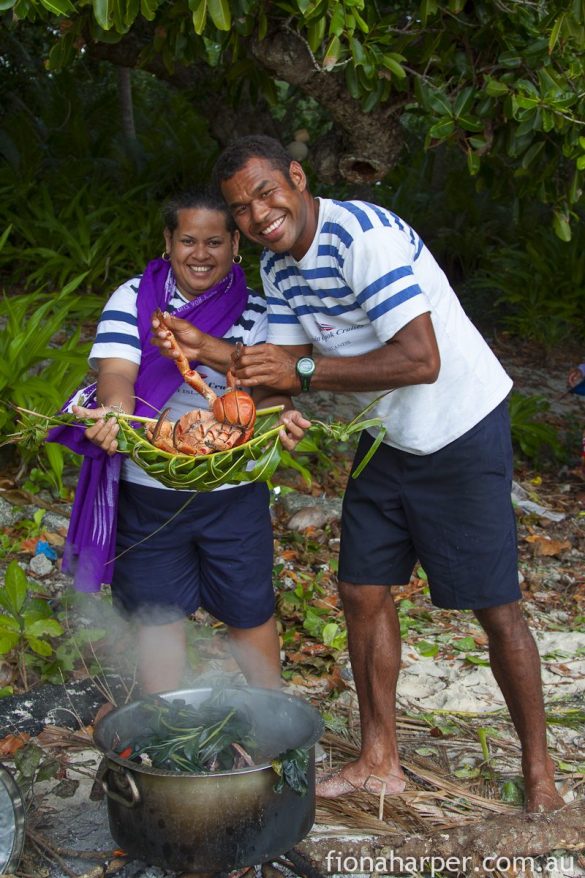 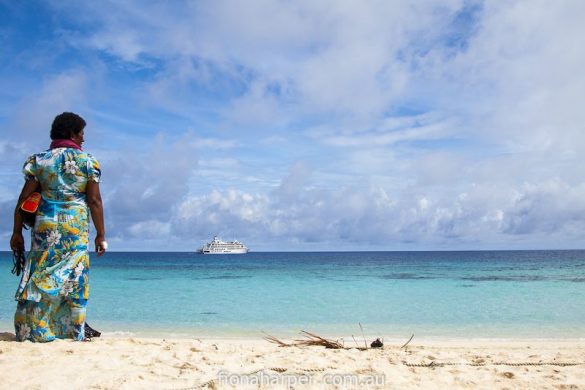 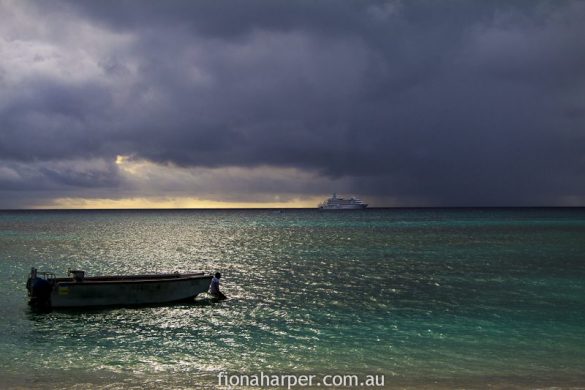 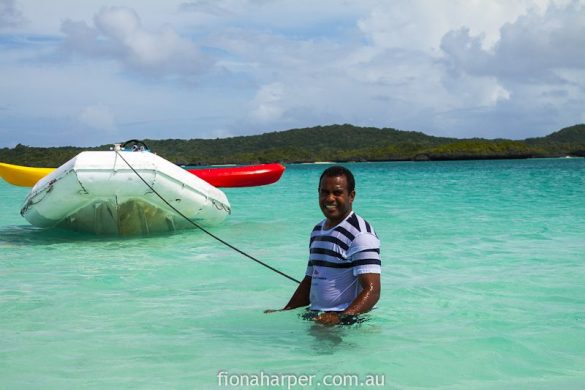 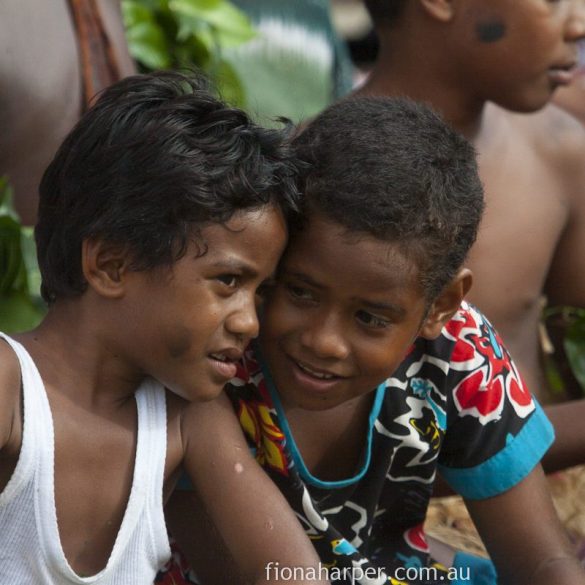 MUSHROOM-like islets poke above an implausibly blue sea, their craggy caps cloaked in vegetation clinging grimly to weathered limestone. The vast lagoon stretches as far as the eye can see. The turquoise water is pierced by curiously shaped islets undercut at sea level.

Skidding across the lagoon in the ship’s tender, flying fish skip across the surface while turtles scarper in our wake. Gentle south-east trade winds swoosh through coconut palms ashore. The receding tide reveals slivers of sand the colour of sun-bleached locks seen on avid surfers. Only there are no surfers.

There’s no surf either: unless you count the maelstrom of current and tides that converge at the narrow entrance to Fulaga Lagoon, a passage too treacherous for MV Reef Endeavour, which hovers offshore while we explore the lagoon. There are, however, a handful of villages fortunate to have Fulago Lagoon in their backyard.

Fulaga Island is actually a crescent shaped strip of land protecting the 8km long lagoon from rolling ocean swells. One of 57 islands strung across the South Pacific Ocean like a jewelled necklace, Fulago is the diamond in the chain. After visiting Fiji so many times, I’ve some idea where to find what marketers like to call the “real Fiji”, though I think all of Fiji is pretty “real”. In my opinion it’s paradise on Earth: the kind of place I’d like to drop into permanently after dropping out of mainstream society
altogether.

It’s possible to reach Fulago via the passenger-carrying barge that brings provisions to outlying islands each month. Typical of laidback Fiji, scheduling is a little vague, operating unofficially on “island time”. By far the best way to visit this remote archipelago is with Captain Cook Cruises, the only commercial cruise vessel operating this far east of Viti Levu.

At Makogai Island we snorkel over giant clams the size of a small teenager, while ashore hawksbill turtle hatchlings little larger than a matchbox await their pending release into the wild. A barebones, but important research program is managed by gentle-natured Department of Fisheries employee Carmelli who tells me “the generator broke down a few weeks ago, so we have no power until parts come from Suva”. That may take weeks.

A former leper colony, we visit an overgrown cemetery with hillside headstones at odd angles gradually being reclaimed by dense jungle. School children who have been eagerly anticipating our visit dance and sing on the immaculately groomed grass forecourt of their school. The donation box sits front and centre: our visit provides a much welcomed boost to their continued education.

On Taveuni Island (known as the garden island), we swim in a boulder-strewn stream fed by a plunging waterfall. Mist rises into the forest drenching a cascading jumble of vegetation every hue of green. Later, walking along the coastal path that meanders through villages, past school playgrounds and across streams, villagers congregate on the beach where the MV Reef Endeavour crew has prepared a picnic lunch. Sitting on logs washed ashore beneath coconut palms, local ladies chat shyly while children from the ship and village plunge into the sea giggling hysterically.

A few hundred miles later we venture ashore in the Lau Islands for the first time at Wailagilala Island. An isolated coral atoll, it’s a splendid introduction to places without postcodes. Bathed in warm sunshine it takes about 20 minutes to walk around the entire island despite trying to drag it out as long as I can. Noddy birds congregate on a sand spit jutting into a calm sea. The beach forms a collection point for flotsam and jetsam washed ashore from who knows where. Island caretaker Pete moors his banana boat as I wander past clutching bleached driftwood souvenirs, his bucket full of trevally caught on the fringing reef.

At Vanuabalavu Island, at Fiji’s own Bay of Islands, soft corals lean to the current rushing through a narrow gap between islands in a sort of horizontal waterfall. Snorkelling, we drift into a limestone- walled grotto that allows us access as the tide falls. Going ashore at Vuaqava Island, villagers have trussed up coconut crabs strung up between stakes on the beach. We buy one for a few dollars, which is boiled in a pot of furiously bubbling salt water over a fire. Our cruise crew take the opportunity to indulge in a casual seafood beach feast. We opt to enjoy our crab back onboard MV Reef Endeavour with sundowners.

Naturally, the surrounding sea forms an integral part of life in these parts, though I don’t expect to be quite so moved during a turtle calling ceremony on Kaduvu Island. Scrambling up a steep incline high on a headland, village ladies are decked out in floral dresses every colour of the rainbow. Singing, dancing and chanting ensues as they summon the turtles in the sea far below. I don’t expect any action, but am delighted when one, then another, turtle pokes its head above the surface. The hill erupts in cheers, claps and laughter – and more dancing.

This ritual stems from a legend about a Namuana princess and her daughter who were captured by warriors from a neighbouring village while fishing. After a storm threatened and the boat was in danger of capsizing, the women morphed into turtles before being tossed overboard by the crew. Villagers believe their ancestral spirits live on in turtles, hence the joyous celebration when they respond to this summons.

Fijians need little reason to break out in song and dance. It’s one of the absolute pleasures in visiting a country where infectious singing and dancing are as natural as breathing.