Filled with doubt, what was I thinking? 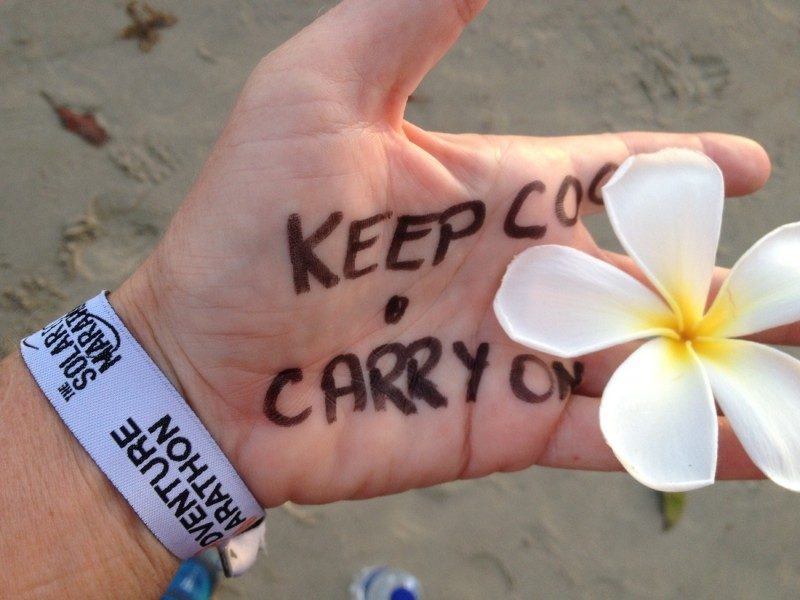 A blank look and extended silence is all I got when I told Mum I was going to run a Half Marathon. The Solar Eclipse Half Marathon no less. She didn’t get it. And quite probably thought it was just one more half-baked idea from a middle child who’s major success to date was an ability to totally avoid commitment. A serial under-achiever whose flighty tendencies suited a career gypsy always on the move. And who could blame her? Two years ago I couldn’t jog to the end of the street. 21km apparently is quite a bit further.

Switching midway to barefoot running shoes after picking up some Merrells in Quebec City, if  long distance runners feet are judged by their raw ugliness, I’m a serious contender. Little to do with the shoes I might add (which actually fit like the Glove they are named after) and more to do with feet taking the front line in an active life.

Six days out though and I’m filled with fear, doubt and anxiety.  What on earth was I thinking lining up beside seasoned marathoners? Friends have tried to boost my confidence with ‘you’ll be fine’, ‘you can do it’, ‘you’re braver than I’. But I can’t help wonder if I’m rather more foolish than brave. Just short of the wrong side of 50 I’ve paid my (not unsubstantial) dollars and entered the Half Marathon. The tight arse in me thinks I should get my money’s worth and run the full Marathon. But I’ve some remaining good sense left. A briefly passionate love affair now ended stands out if only for a reality check. Advising me not to mistake my ambition for ability, his harsh words retain a niggling doubt. But perhaps they remain in my head simply because it helps me to mentally process another failed relationship.

Running a half marathon distance has occupied my mind for much of a tumultuous year mostly dominated by a protracted legal battle with an ex partner. Emotionally and financially drained, running has been cathartic. Providing clarity amongst distressing alternatives.  To  engage my body in something so meditatively physical as running quietens the voices that tell me life is just too hard.  I’ve no doubt that running has enabled me to cope when it was preferable to curl into the fetal position indefinitely shedding buckets of tears. Or worse.  And since I’m  rarely content with the mundane, it seemed a logical step to take it as far as I could. Which turns out to be 21km.  Or at least, I hope that’s where I’m headed.

A marathon in a category of its own, The Solar Eclipse Marathon is the only marathon in the world that utilises a solar eclipse as the start gun. It’s taking place  in my own back yard just up the road in Port Douglas. How can I not be a part of it?

With six more sleeps to go, yesterday was my last real run before the race on Wednesday. An easy (albeit fast) 8km along a route I’ve been running regularly since moving to Cairns in April, I tried to visualise running for over 2hours. Keep Cool and Carry On is my race day motto. My backup inspiration, which will hopefully kick in as the hard km’s are behind me, and definitely by the 18km mark, my longest training run,  is: Enjoy the Achievement!

As the moon moves across the sun and the solar eclipse ends at 6.40am on 14 November, I’ll be on the start line on Four Mile Beach. Itching to get the first 11km’s knocked off so I can enjoy the downhill run home. Those who have run a marathon say it’s one of the toughest, yet rewarding, things they’ve ever done. So by that yardstick, a half should be only half as tough. Though surely not half as rewarding? I’ll have the answer come Wednesday.

If you’re in Port Douglas next week, check out QT Resort Port Douglas and the ‘After Party’ on 14 November. I just hope there’s plenty of  sun lounges and masseusses  on hand! A tall chilled glass of bubbles will be rather welcome too.

Hi Fiona, glad your getting some ‘mileage’ out of that photograph! =D Good luck for the marathon!