Australia’s Kimberley region is home to some of the world’s most extraordinary rock art. Some sites, like Raft Point, where the walls and overhangs of a cave high up an escarpment, are such extraordinary galleries that it is challenging to appreciate the significance of these ancient galleries and to fathom just how old the artworks are. 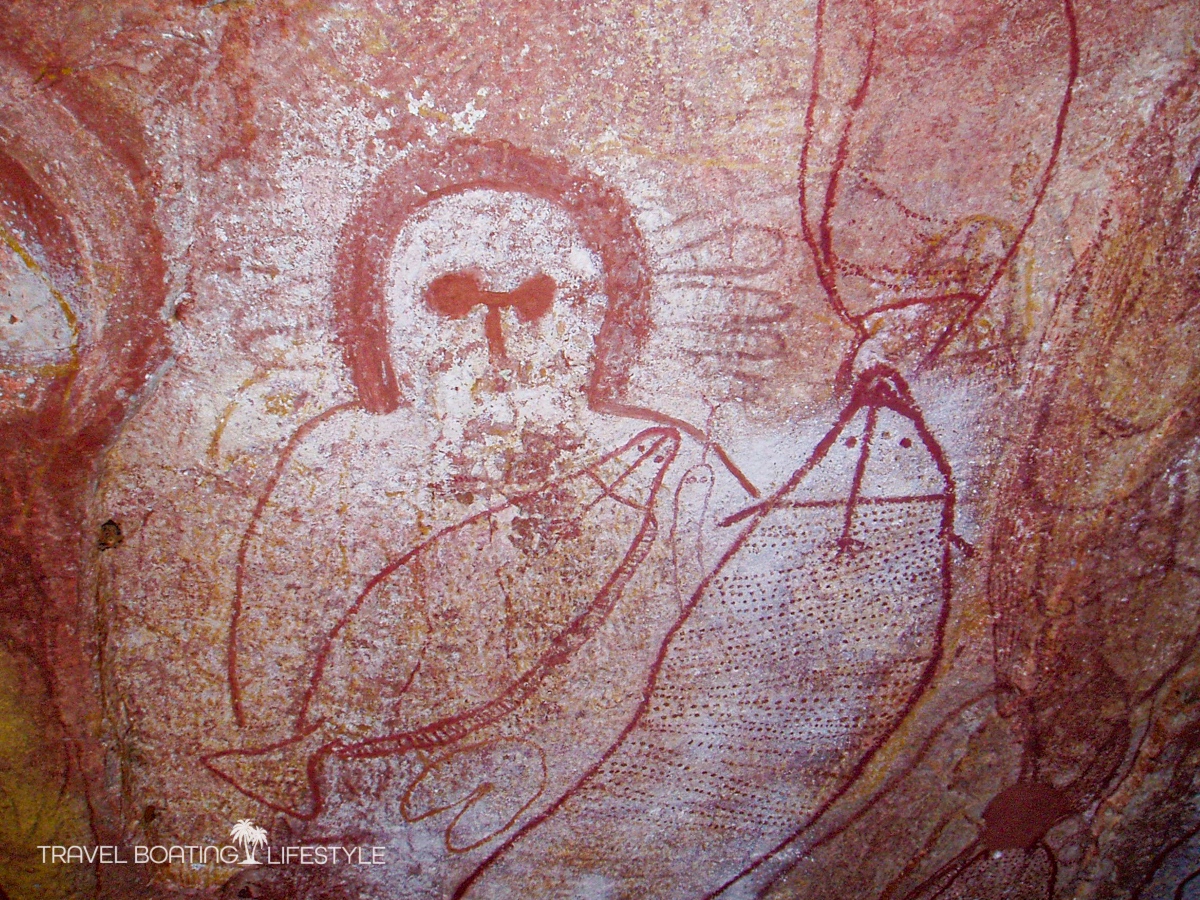 Sailing north from Broome towards Darwin in this wild frontier far removed from any known civilisation, we arrived at Raft Point after dark, relying solely on GPS and the light of a full moon to navigate safely. In these parts it’s all about enormous tides and travelling when the tide is favourable. Often times that means sailing at night in order to take advantage of favourable currents that may run up to 10 knots around headlands or through narrow passes. 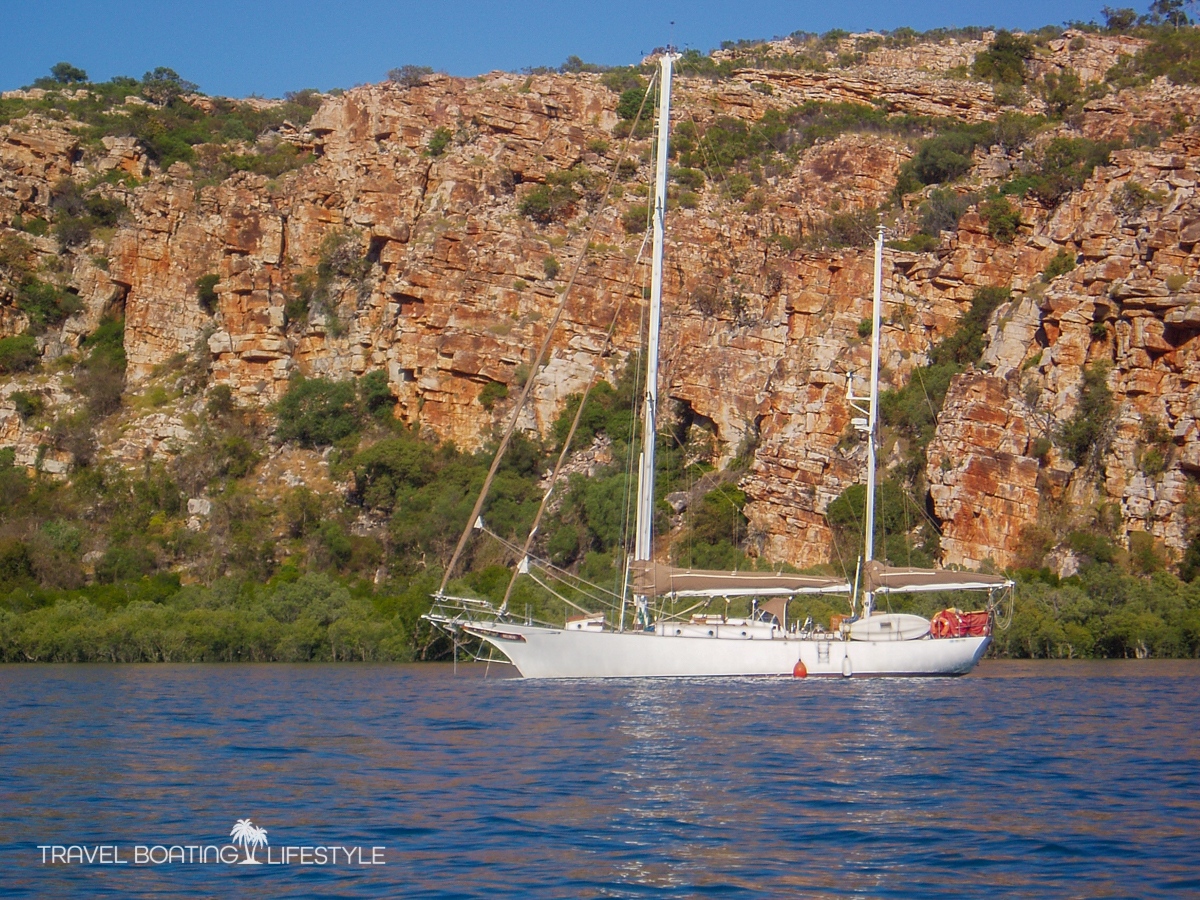 Navigating the Kimberley has many challenges: moving between anchorages after dark and relying upon paper and electronic charts that may or may not be accurate. Then there is the heat which is relentless. With dangerous crocodiles in the sea there is no chance of diving overboard to cool off either. Standing under the saltwater anchor deckwash is a fairly dismal alternative to swimming in the sea, let me tell you.

But back to Raft Point and the mammoth Kimberley tides. Which is how we found ourselves dropping anchor in the cliff-lined bay at Raft Point in the dead of night. We could see the outlines of a large landmass on the shore and relied upon the depth sounder to figure out when we were close enough to shore to anchor, being conservative given that about 10m of water was going to disappear while we slept. But Raft Point is a very deep anchorage and so we anchored in water way too deep. But this seemed a safer option than getting too close inshore and finding the water disappearing at low tide – which it does every six hours or so in these parts. 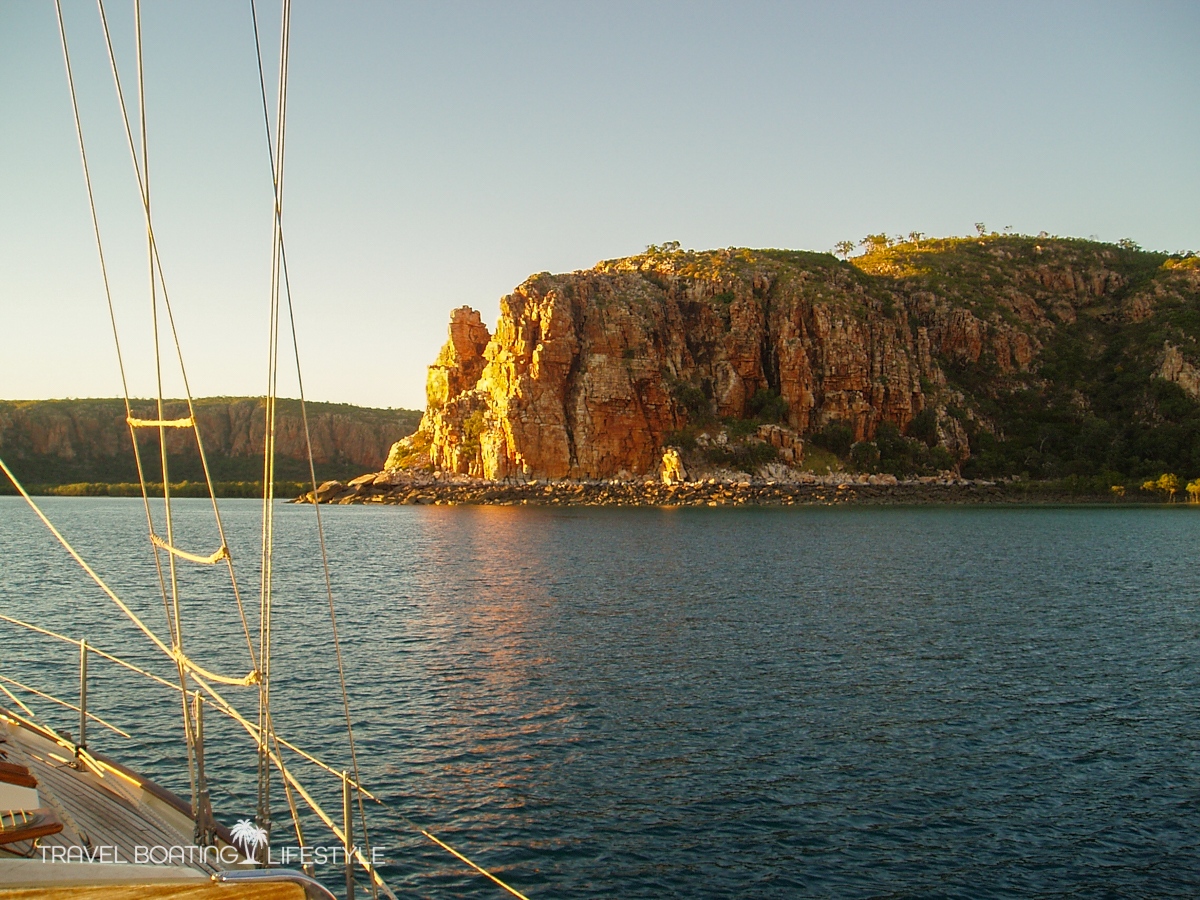 Awaking before sunrise the next morning we were welcomed with the sandstone headland of Raft Point bathed in an orange glow. Viewing the cave that housed the rock art, much of the previous nights anxiety was immediately forgotten. Raft Point is indisputably one of the most remarkable rock art sites I’ve had the privilege of viewing. This, in a region like the Kimberley which is laden with extraordinary Aboriginal rock art sites. 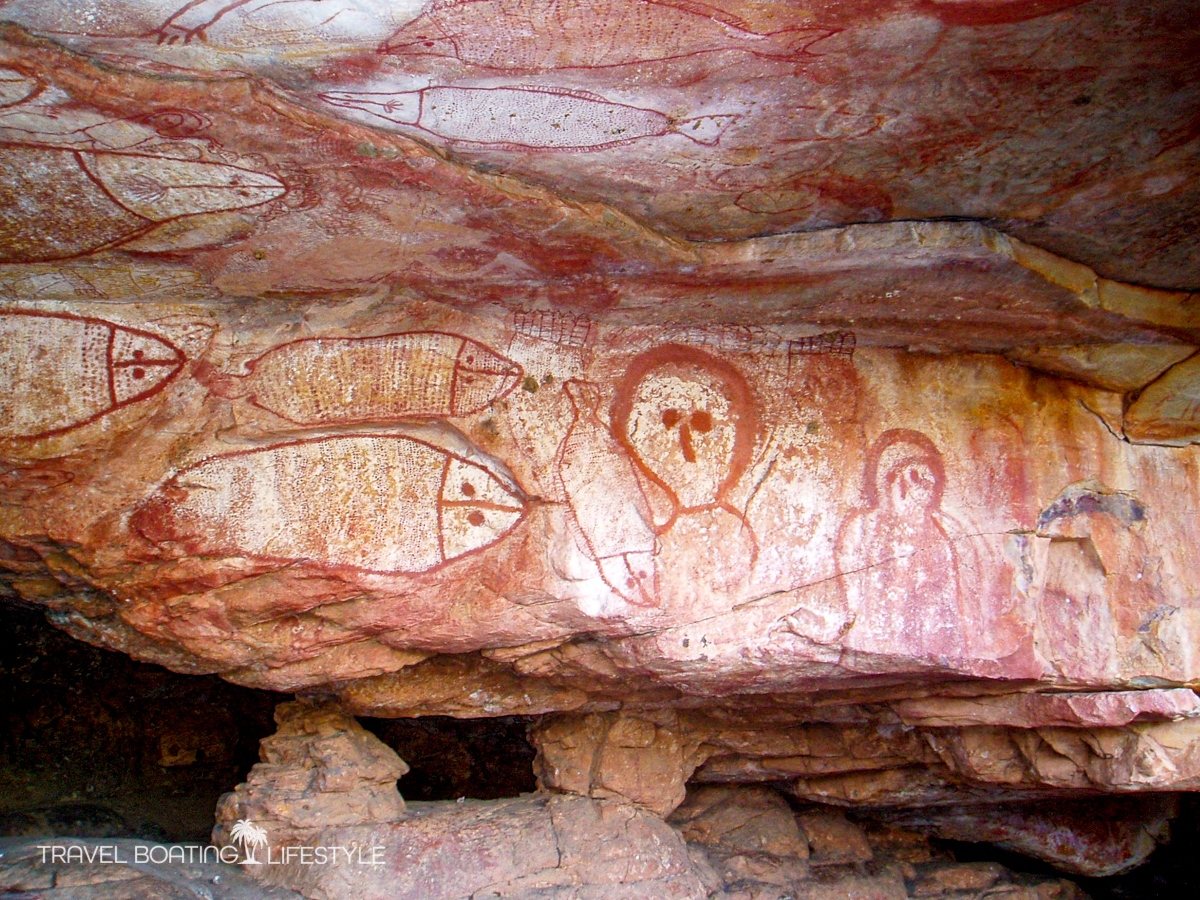 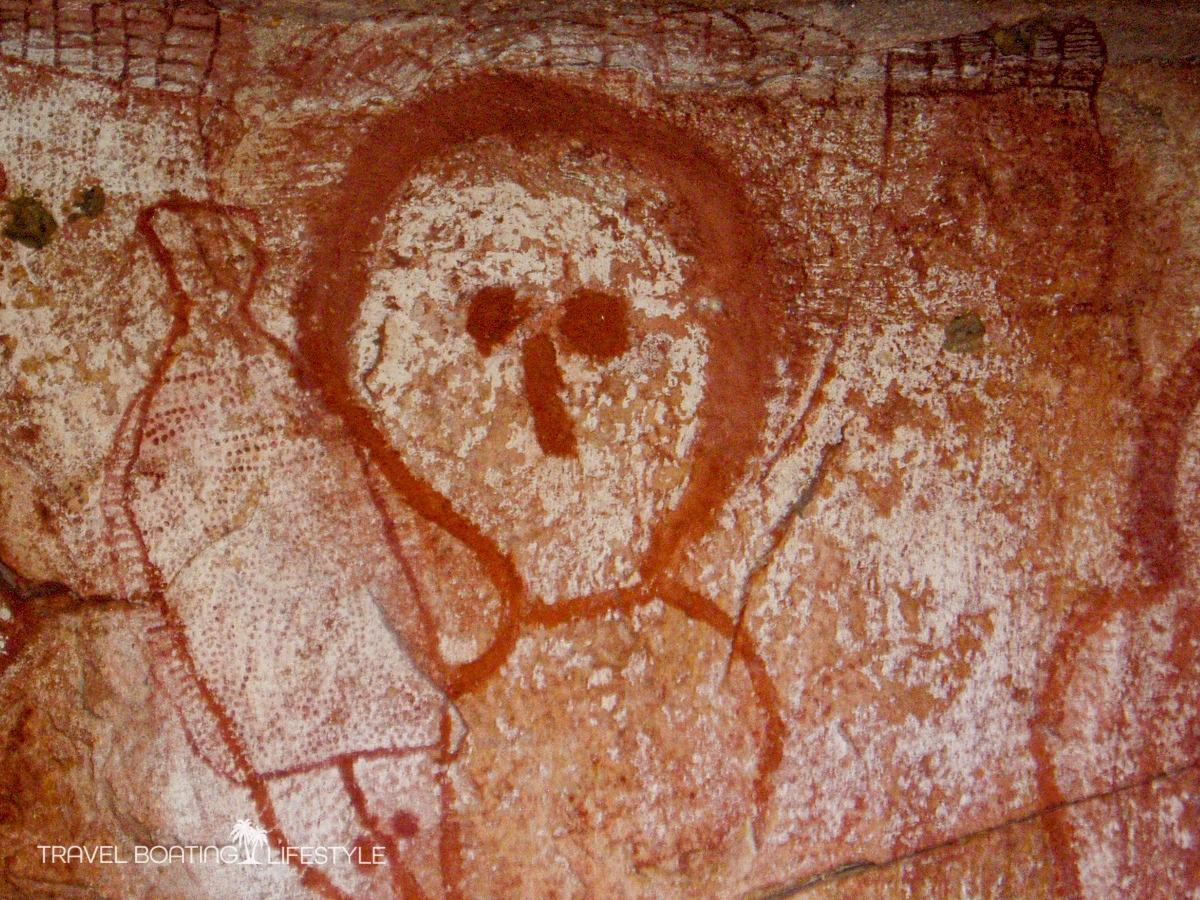 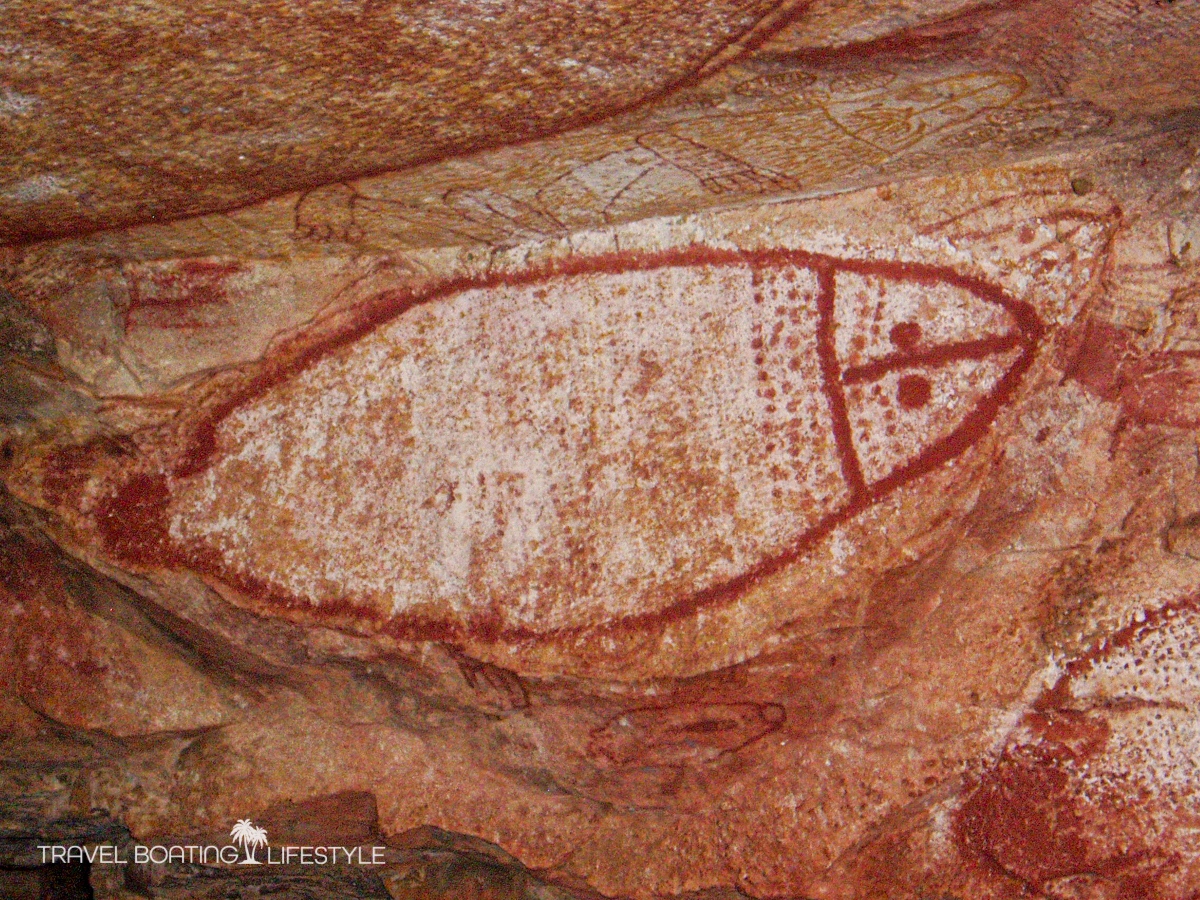 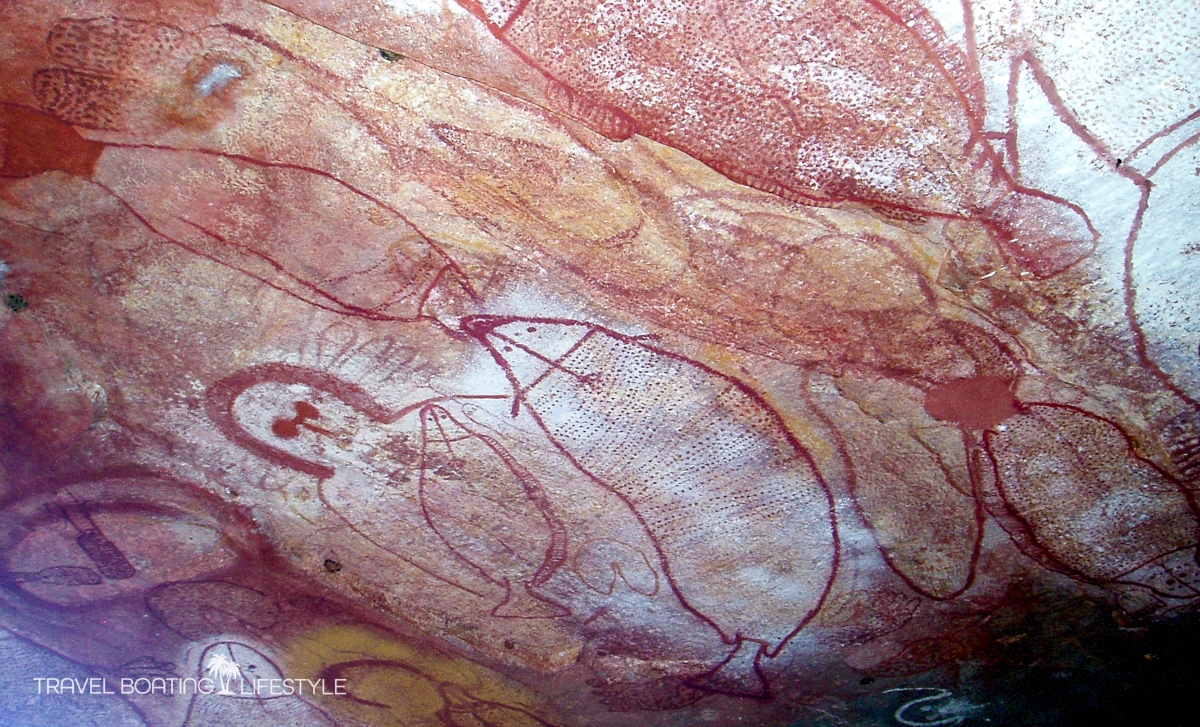 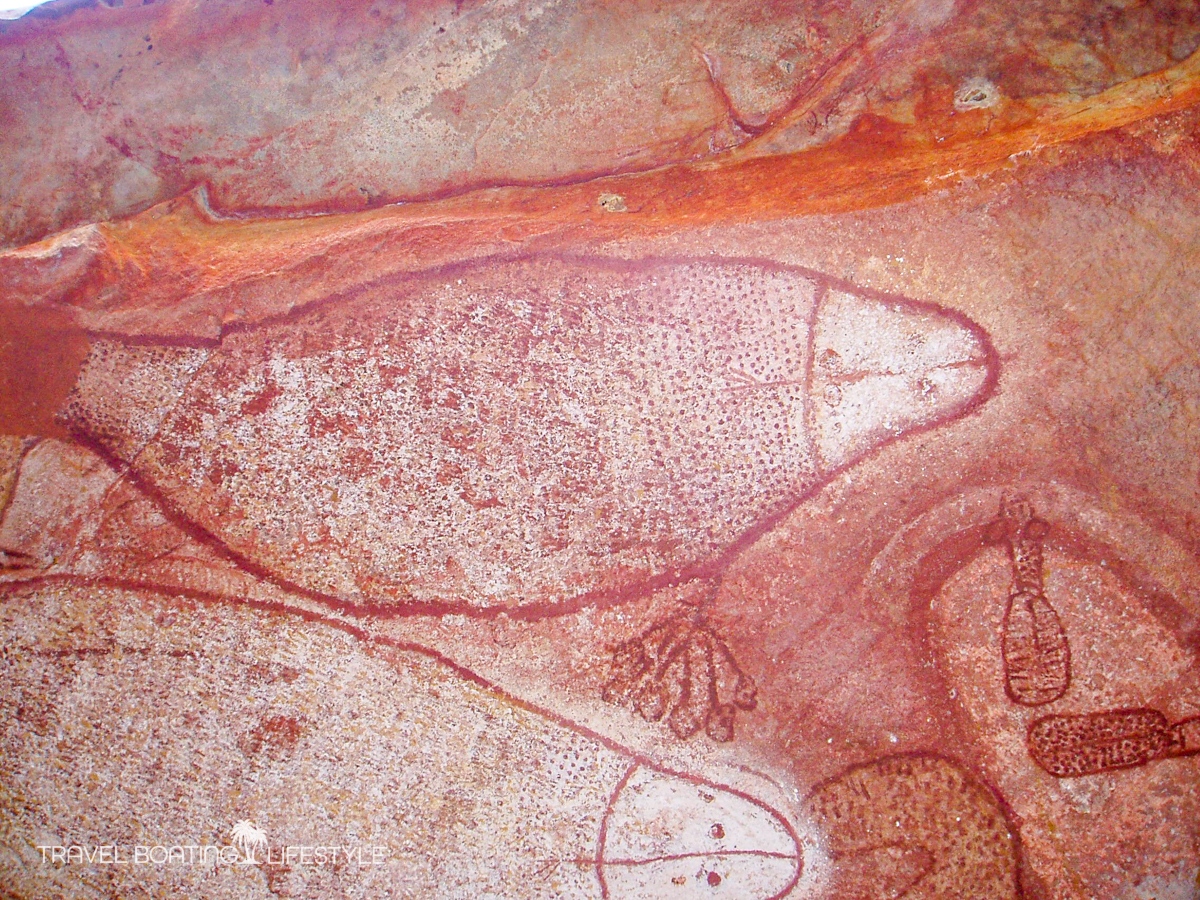 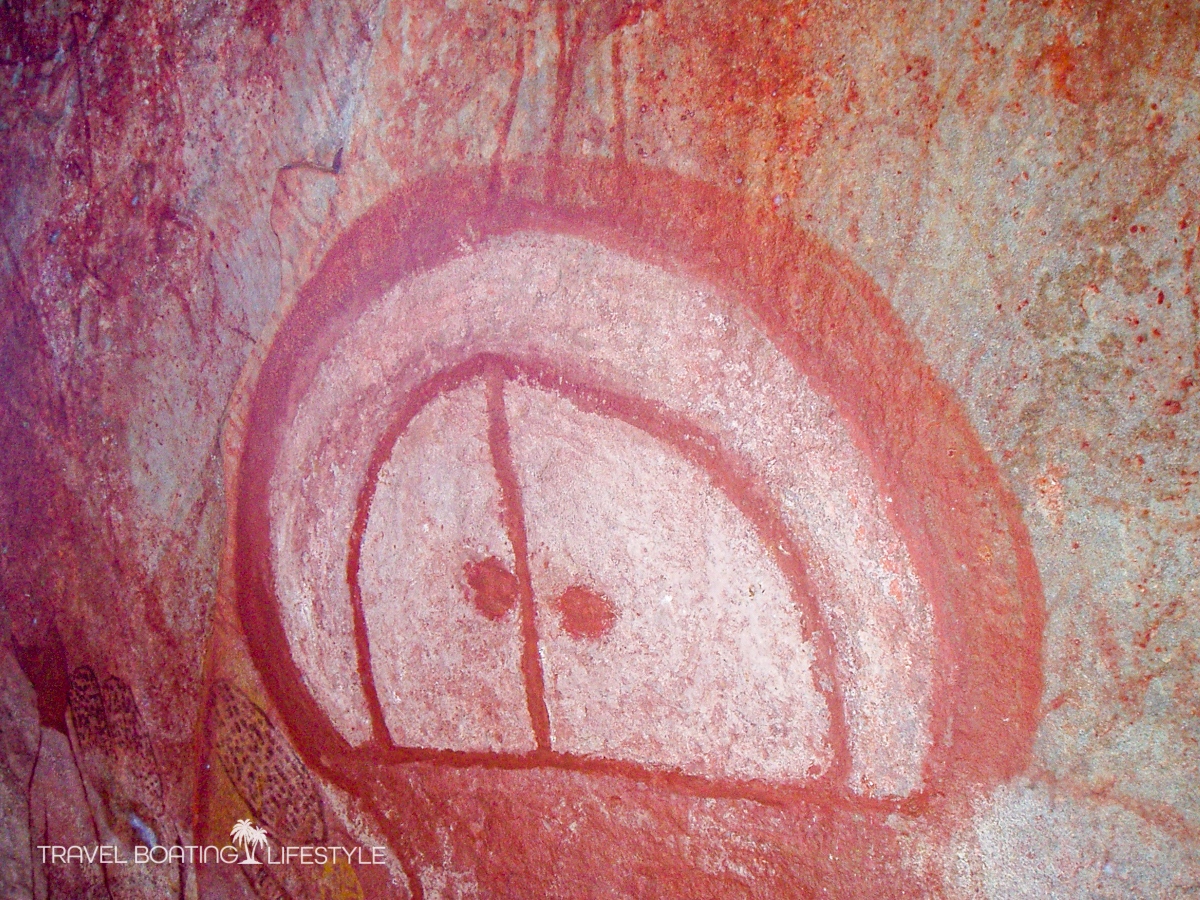 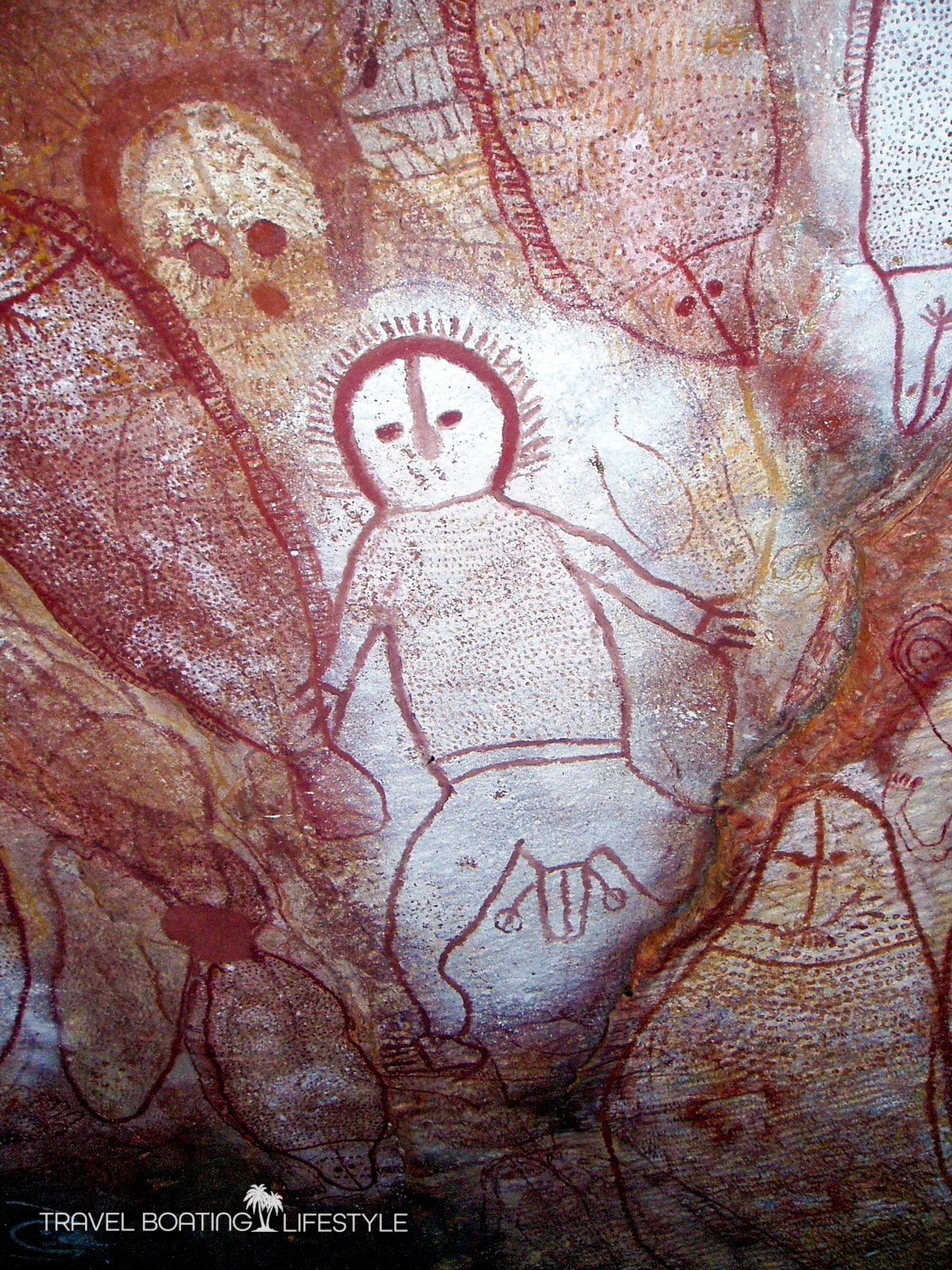 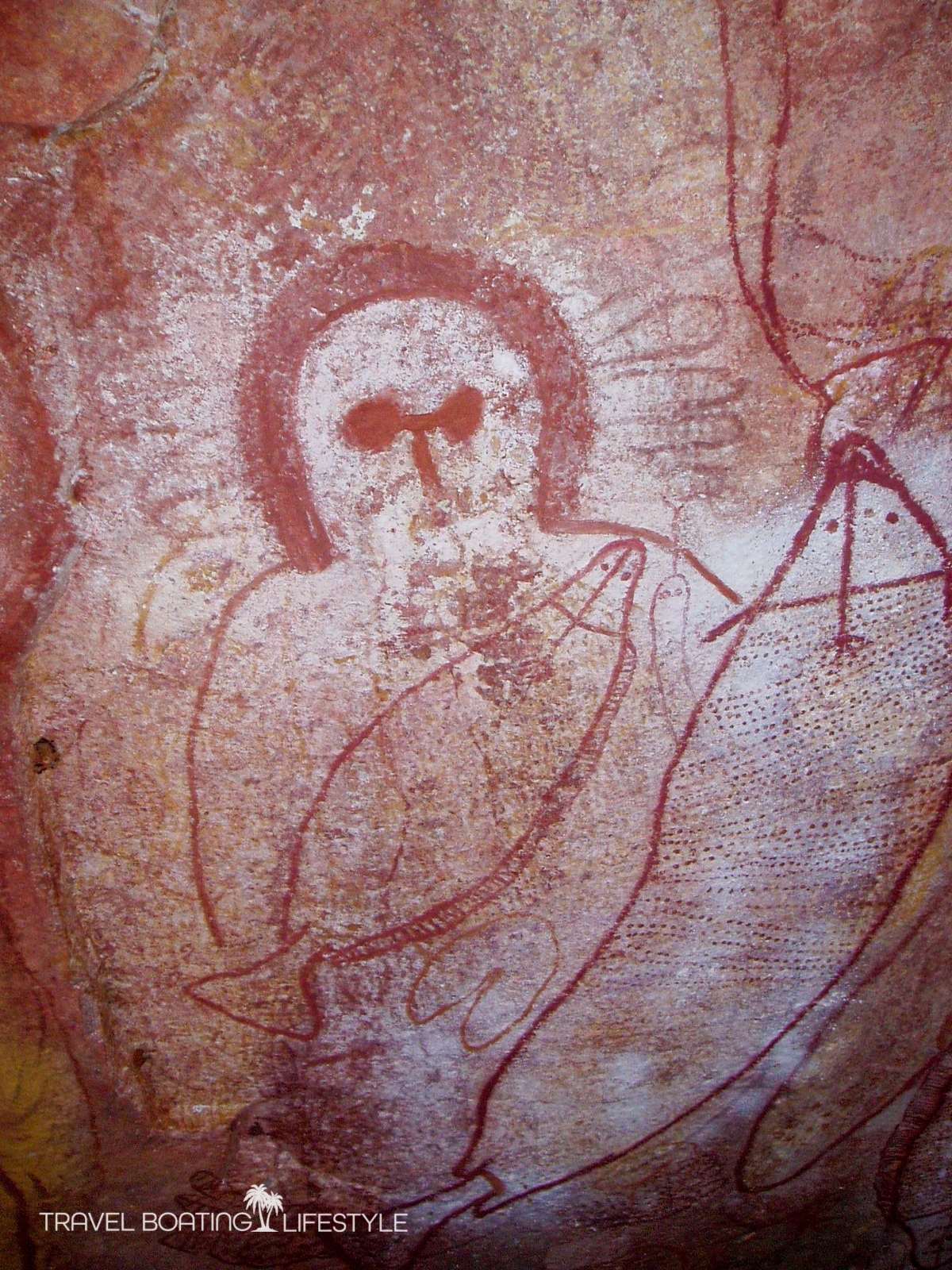 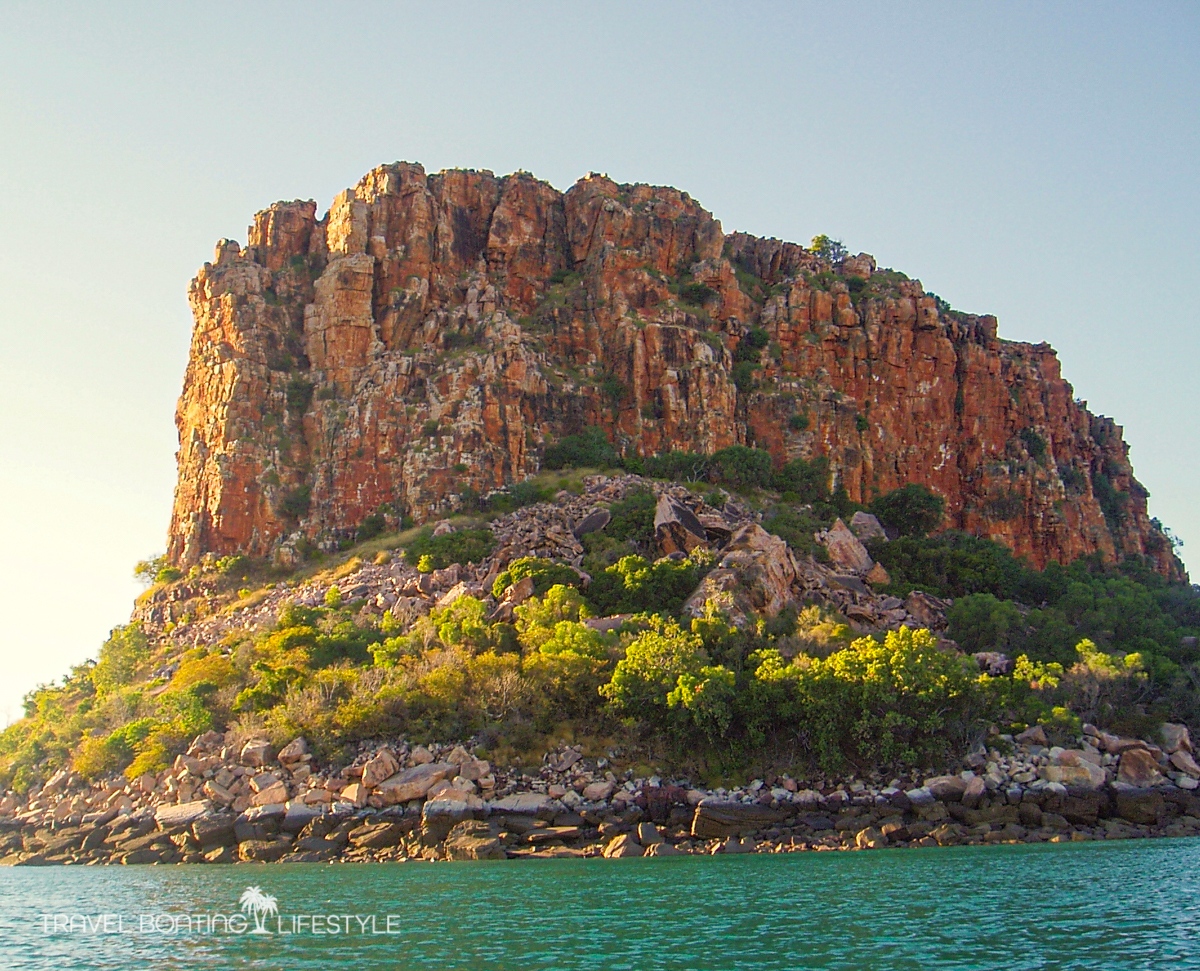 I am wondering which Traditional Owner took you to that site? It is owned (yes legally) by a family.

Hi Peter, that’s a good question. I only wish I had written down their names – my visit was so long ago, the memories of the incredible art are what remains.