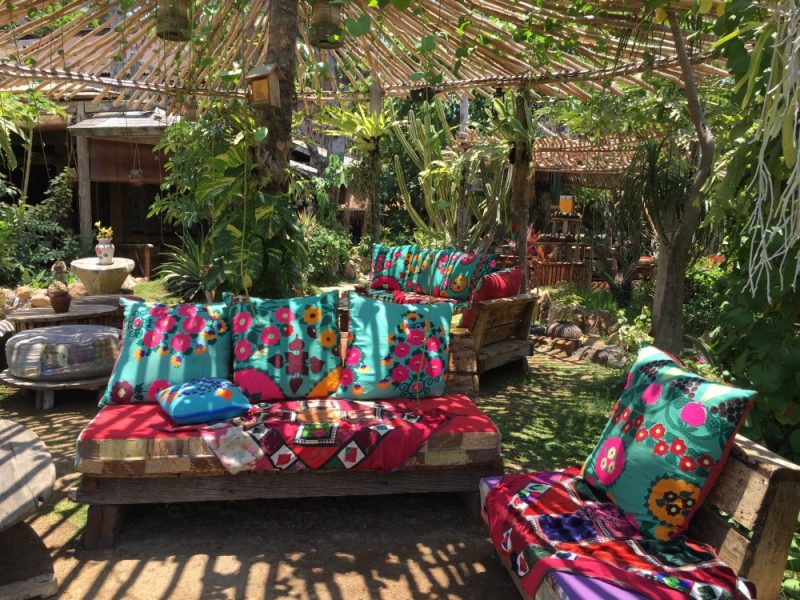 Planning a short escape from Australia, my initial dilemma is not deciding where to go, as I’ve already decided on Asia. My real dilemma is one of tantalising my taste buds, but which ones to satisfy? Sweet, nutty Indonesian char grilled chicken satays, or aromatic, hot and sour Thai laksa? Perhaps spicy Singapore noodles or roti bread dipped in a rich, pungent Malaysian curry? It’s a tough choice.

Just a few hours after departing Perth I casually knot a sarong around my hips before tossing on a cotton shirt, slip on a pair of sandals and I’m dressed for hitting the streets, Balinese style in search of a roadside satay vendor. As I leave the dark coolness of my villa I step through the heavy timber doors into the searing heat that accentuates the heady aroma of frangipani mingled with incense. The women who refresh the offerings each morning to their Hindu God, which include lighting incense sticks, smile shyly and offer a friendly ‘Selamat Pagi’ (meaning good morning) as I pass through the high-walled lush garden and out onto the street. Dodging motorbikes, taxis, the ubiquitous Bemo as well as the odd bicycle laden with rider, chooks and even a grimly clinging child or two, it’s a startling contrast to the tranquility within.

La Laguna is a fabulous beachfront restaurant in Cengdu. Go there for brunch, lunch, sundowners or dinner. I promise you’ll be reluctant to leave

It takes me a few moments to adjust to the noise amid the jostling sidewalk, an intriguing cacophony that’s unique to Asia. It’s not long before I hear the male cry of ‘transport transport,’ coming from within a group of men leaning on their cars, smoking. He rolls his r’s gorgeously, making me want to happily imitate the sweet-faced Bemo drivers’ accent. Shaking my head and smiling, I offer a ‘jalan jalan’ response, imitating a walking motion with my first two fingers, indicating a ‘no thanks I’m walking’ response. Wondering if I’ve used the right word, as a waft of smoky clove tobacco lingers in the hot still air as he retreats, I’m immediately reminded of my first visit to Bali as a naïve 15 year old back in the late 70’s.

Absconding from the bungalow I shared with my 16 year old sister, with our strict parents unaccountably absent, visiting friends in a nearby bungalow, we wandered the back lanes of Kuta. Lured by Boney M’s catchy Rivers of Babylon, we brazenly bounded onto the dance floor of what was then known as a disco, but is today simply called a ‘club’. The name of the bar is long forgotten but the night is forever etched in my memory, as we danced, laughed and tried to communicate with shy young Balinese men who spoke little English. Years later my sister confessed that she experienced her first kiss on that dance floor with the local John Travolta equivalent, while I remember the night mostly for the acrid layers of clove cigarette smoke hanging in the air, in the days when smoking indoors was the norm.

Falling in love with the people, the culture and the natural beauty of Bali on that first visit, I’ve returned countless times since. Leaving mainstream Kuta Beach behind, the island is awash with intriguing coastal and inland villages, populated by culturally rich, hospitable people, many of whom are talented artisans. Away from the tourist strips, it’s the kind of place where locals wave as you pass by, where children giggle delightedly when they see your strange, foreign face.

Bali is the perfect destination for a short break from Perth, whether travelling alone, with friends or as a family group. Less than fours hours flying time, it’s actually quicker to fly to Denpasar than it is to Brisbane. And it’s far more exotic. While Perth may well be one of the most isolated cities in the world, its distance from the rest of Australian civilisation makes it pretty accessible to some of South East Asia’s most exciting destinations. In less time that it takes to fly to Cairns, you could be hitting the streets of Kuala Lumpur or Singapore, savouring those heady curries or spicy noodles within minutes of touching down. Travel just a little further to Bangkok and an enticing hot and sour laksa beckons. What’s not to love about an exotic short break when it’s so accessible?

Just wanted to stop by and say thanks. Enjoy reading your stuff.

That reminds me of my own first trip to Bali when I was 18. It was such a safe place back then, it seemed like an extension of Australia, we’ve been so often. Love the people and the food there.