The Way of Tea in Japan

Steeped in ceremonial rituals, there is far more to sipping tea than simply quenching one’s thirst 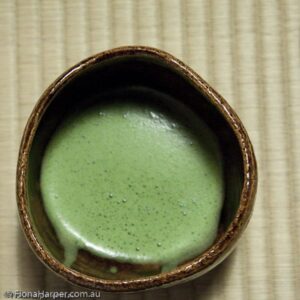 Tea ceremony is about much than tea

Tea is not to be trifled with. Indeed when you’re the tenth generation entrusted with creating pots for ritualistic tea ceremony, tea is life. Master potter Chozaemon Toshiro, known simply as Tenth Generation, and awarded a Person of Cultural Merit award from the Emperor, has serious clay credentials. With lineage dating back to his ancestor who created the first tea pot for the Shogun of the Kaga Clan almost 350 years ago, Tenth Generation’s Raku ware is highly prized as collector’s pieces.

Though on the day I visit Ohi Museum in Kanazawa City to admire his work, followed by tea, Tenth Generation is nowhere to be seen. Instead, his charismatic wife Yokosan presides, dressed in white kimono adorned with embroidered silver blossoms. Immaculately groomed, Yokosan is an elegant woman whose nimbleness defies her 77 years. Exuding grace and charm, she glides into the cha-shitsu room, effortlessly slipping onto the tatami mat, her legs primly tucked beneath her as she prepares her utensils for tea. Highly ceremonial and steeped in ancient traditions, I soon learn that tea ceremony, or chado, (literally translated means ‘way of tea’) is more about ceremony, rather less about tea. 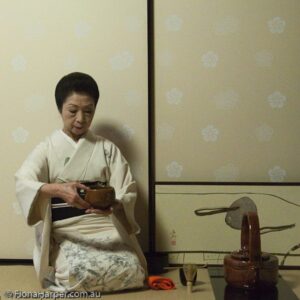 Yokosan tells us that she learned the etiquette of chado after her 40th year when it became necessary to host important visitors as Tenth Generation’s star rose. “Being humble is the key,” she says gently, adding softly that it took her ten years to perfect the precise and intricate sequence of movements which hark back to the eighth century. Watching her is akin to admiring a graceful artist perform.

Once delicate sweets and bowls containing bitter-tasting green tea have been served, it is customary for guests to politely admire the bowl, complementing the host.  Which is easy to do when you’re drinking from one of Tenth Generations gorgeous creations. Once this formality is dispensed with, it’s time to discuss business with fellow guests, the real reason many Japanese businessmen linger over tea. Wealthy businessmen would traditionally engage geisha to entertain guests, who would sing, play an instrument or engage in lively, sometimes flirtatious, banter.

Kanazawa City is often referred to as ‘Little Kyoto’ as it once rivalled the ancient capital with its strong cultural heritage. Many traditional ochaya (meaning teahouse) have been preserved along its ancient paved streets with double storey slatted timber buildings lining narrow lanes of the Higashi Chaya District. A popular place to wander, poking about ancient shops and teahouses, but so too to hopefully catch a glimpse of a geisha or maiko (geisha in training) discretely travelling to or from an engagement.

Some ochaya are strictly open by invitation only so you’ll need to come well-credentialed, though Shima Teahouse (now a museum) and Kaikaro Teahouse are open to the public. Just around the corner, at the dazzling Sakuda Gold & Silver Leaf Co, craftsmen and women carefully decorate lacquer ware with ever so delicate wafer-thin gold leaf. It’s said that gold shops of old sold green tea and candy with gold leaf concealed within. Though no gold candy is on display, they do offer gold-flecked tea, along with the opportunity to taste raw gold when coating your own chopsticks with gold leaf. Anticipating something wickedly decadent, it actually tastes of nothing at all, simply melding with saliva before disappearing on my tongue. With walls gilded with gold, it’s worth visiting simply to marvel at the golden bathroom upstairs.

Back at Ohi Museum, Yokosan indicates ever so politely with a mere incline of her elegant neck that chada is completed and it is time for us to leave. On my way out I can’t help noticing that beauty is everywhere in the small details. Delicate miniature paper cranes in cobalt blue paper rest serenely atop the bathroom vanity. Created purely to please the eye and the mind, tea ceremony is much the same. If you participate in chado purely to slake your thirst, you’ve really missed the point.

If You Go
Getting there: Kanazawa can be reached by rail from Tokyo or Osaka
Where to Stay: ANA Crowne Plaza Kanazawa
Best Time: local proverb says ‘even if you forget your lunchbox, don’t forget your umbrella’. Avoid the rainy season by going in spring or autumn
More info at Japan National Tourist Office

The writer was a guest of JNTO. This article first appeared in Jetstar Asia inflight magazine May 2012.