Training for a marathon is all-consuming. It’s also kind of crazy. A program that demands I run five days a week, potentially upwards of four hours some days, makes little sense to those who don’t run. Sometimes it makes little sense to me. Particularly on Sundays when the alarm goes off at 4.30am prompting me to roll out of bed disheveled & delusional. Let’s face it, I’m no Cathy Freeman  and my best form is far behind me. One of the thousands of average runners who make up the middle pack, the only medal I’ll ever clutch is a coveted Finishers medal. 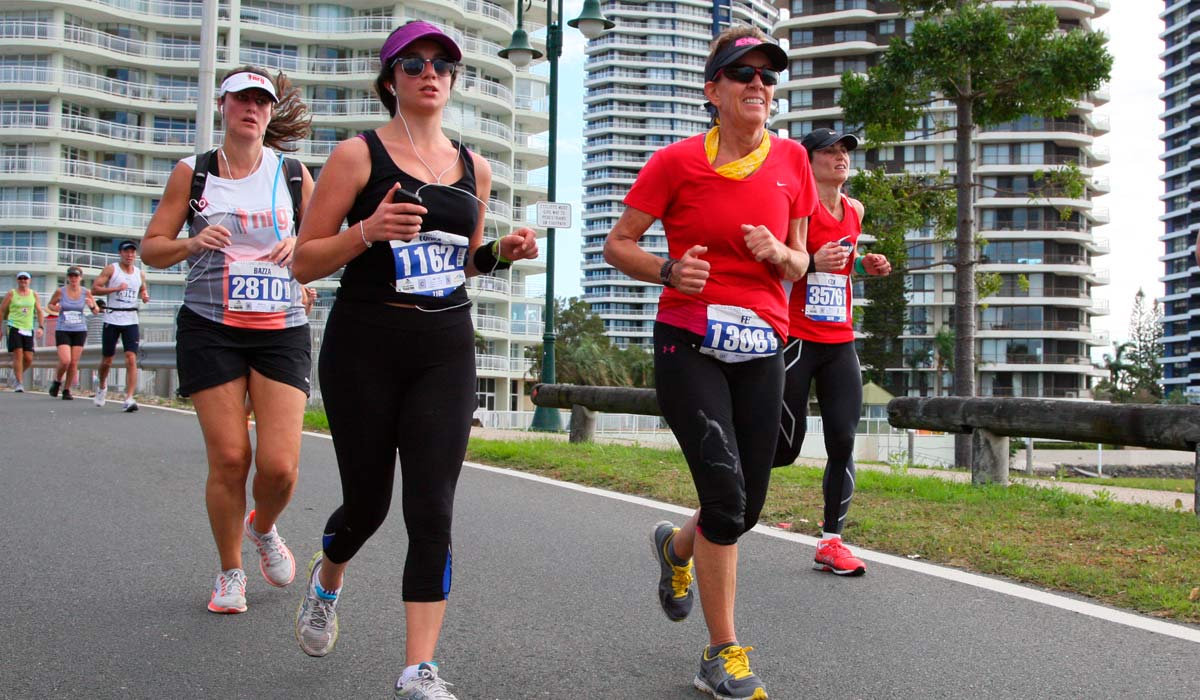 The road to Paris Marathon was never going to be a walk in the park. Running for 42km hurts, even when you throw in distractions of one of the world’s most famous cities. The challenges of making it to the start are many. Finishing is far from a certainty. Four weeks out, advice from the physio is to rest my torn hamstring. For three freakin weeks. Three weeks that coincide with a crucial training period when I should be running long, tough and hard, gutsing it out in sweat instead of sitting on the couch feeling sorry for myself. A tough decision is required. Disappointment runs deep. I’m gutted, in fact. 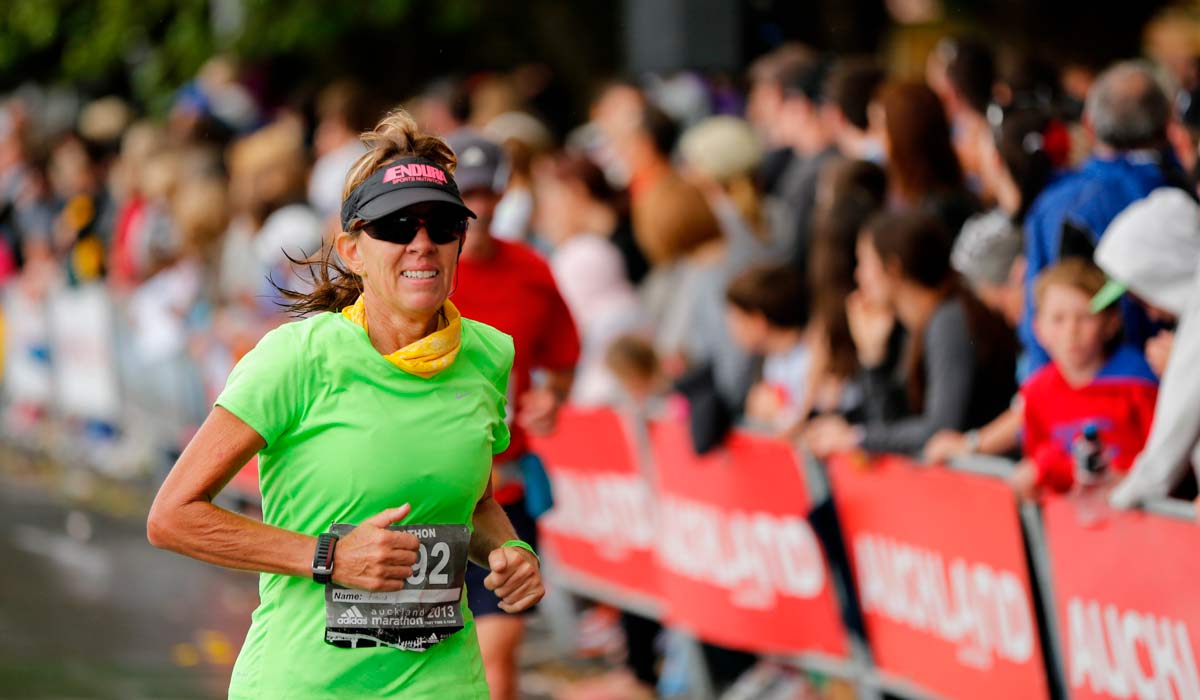 Before I started running I never quite ‘got’  what runners saw in the sport.  Nor why they would talk with pride about the number of kilometres they ran last week, last month, last year, last century. I know now, having tracked every single kilometre myself since I first laced up my runners in a feeble attempt to calm the angry chatter in my head brought on by a relationship meltdown. Running, or more correctly, staggering alternated with walking, gave me an opportunity to put my train smash relationship into perspective. It was an essential diversion from stress. Living on Magnetic Island at the time, those 30 minute sessions allowed me to breathe in fresh sea-drenched air while expelling the frustration & despair of living under the same roof as my estranged partner. 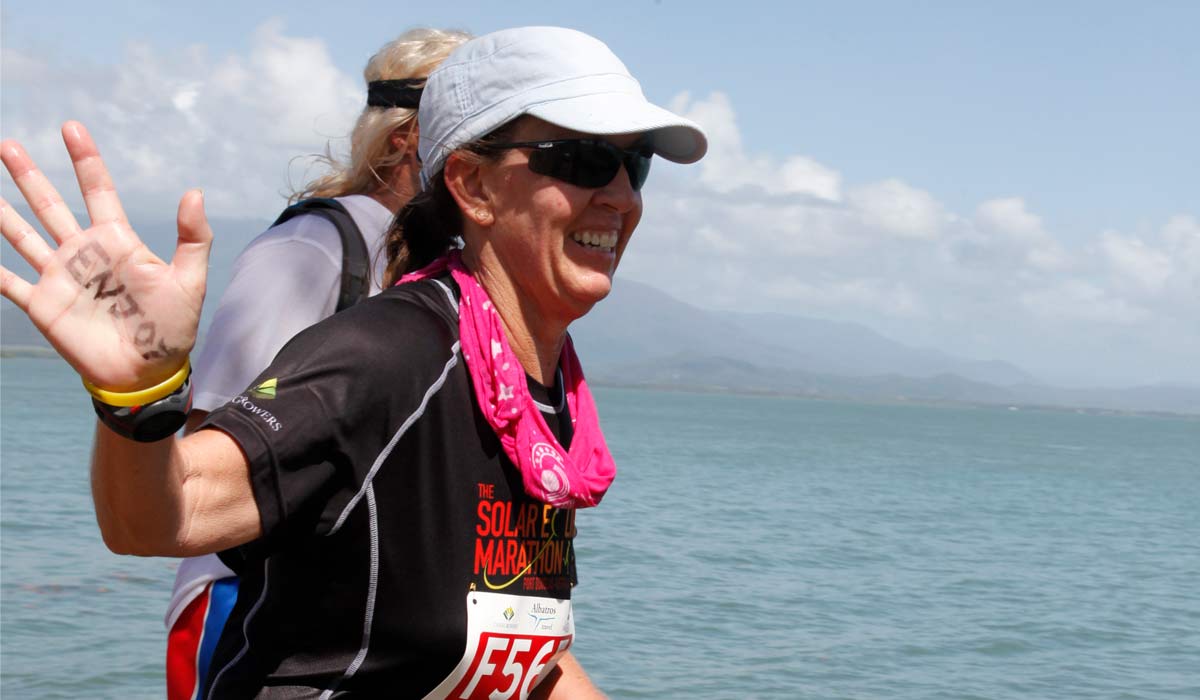 Before Fiona’s first big run, the Solar Eclipse half marathon, she wrote reminders on her hands

But I still didn’t ‘get’ running. I plodded and I puked. I dragged my feet, dodged dogs. I suffered and staggered. But I persisted. As I stretched myself further, 5 km became achievable, then I added some hills, dragging my sorry arse to the summit of the Forts. 8 km felt like a mammoth effort. Pushing myself physically helped me sleep at night. I’d come back from those hilltop runs along trails populated with koalas, wallabies and curlews feeling pretty damn happy with myself. Momentarily. Before the depressive atmosphere at home wore me down. Running on mostly air and water as my appetite disappeared along with former friends who took sides, running became a sort of sanctuary. 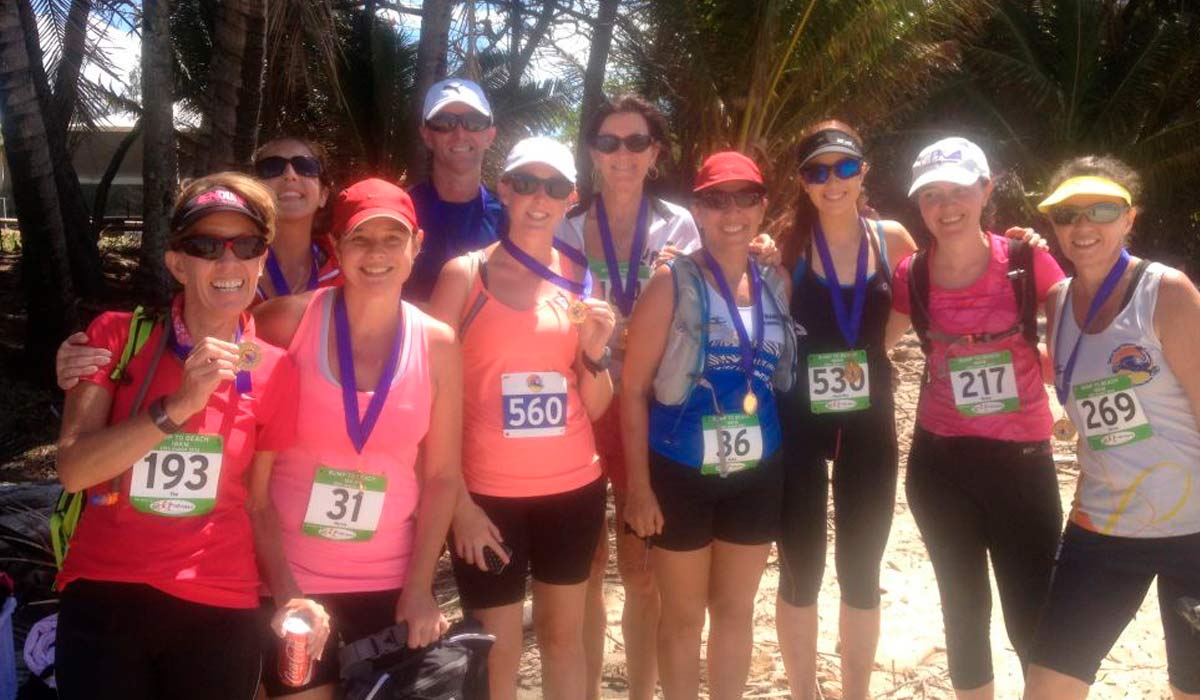 After the Bump to Beach race with Dynamic Running buddies

After moving to Cairns I started to ‘get’ running. I found a group of like-minded souls who were striding out on their own running journeys. Some like me were newbies, others had run ultra marathons. All were supportive and encouraging. I’ve since run thousands of kilometres alongside these inspirational buddies, picking them up when they lag, in return been inspired by their guts and courage when I lumbered. Running became the link in the chain that connected us, sharing laughter, chatter, bucket loads of sweat and the odd tear.  Muddy trails, beachside tracks, over mountains and across creeks, through parks in the dark, somewhere along the way running became fun.

When I first heard about a local event that involved running three marathons in three days I thought ‘you must be kidding, that is really insane’. With two marathons and a couple of halfs behind me now I think differently. It’s not insane at all. It’s actually rather enticing. 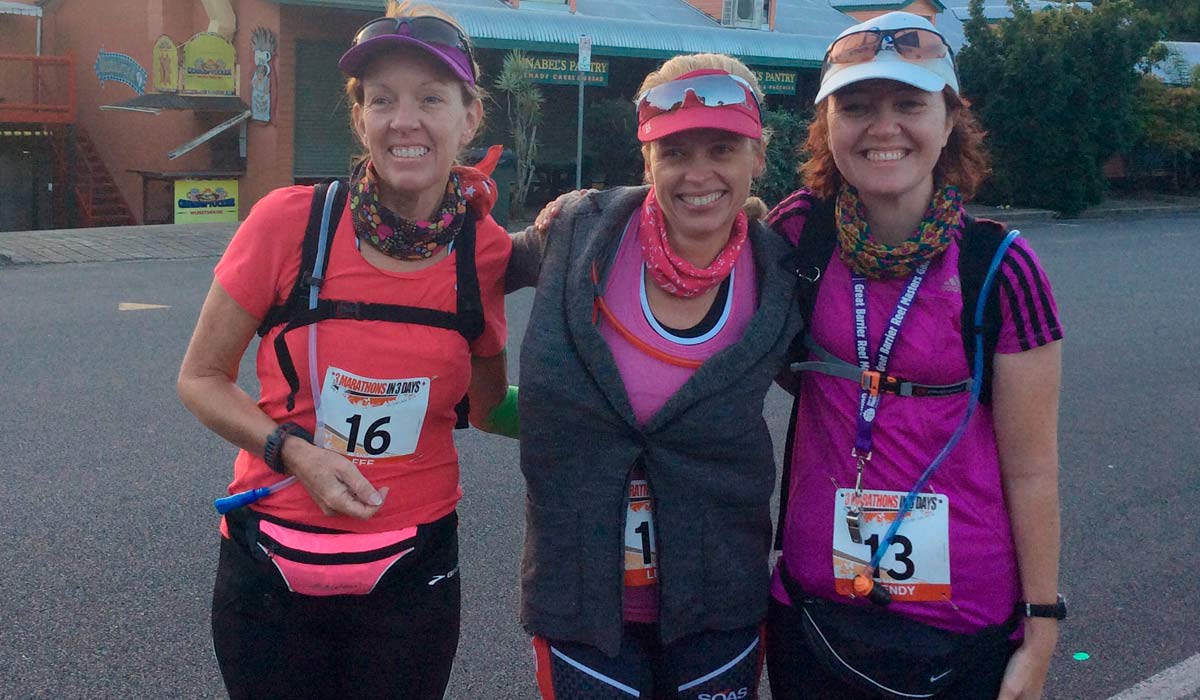 Fiona, Leah and Wendy ran the 2014 3 Marathons in 3 Days event on the mountain trails west of Cairns

Until you get injured that is. Then the absence of running becomes infuriating. It’s difficult to explain to a non-runner the pit of gloom that opens up when you can’t run. When the physio told me I shouldn’t run for three weeks, I thought my Paris Marathon goal was shot. On reflection, maybe it’s not.

I have two choices. I could still run (or walk?) a marathon come 6 April, admittedly under-trained. I’ll be slow, my muscles will be weak, my endurance will be sorely tested. But on the upside I’ll be well rested (no more 4.30am wakeup calls!) and my hamstring should be healed. I hope. At worst I’ll find myself in Paris as a miserable champagne quaffing, baguette and brie munching observer. In Paris!

The alternative is to admit defeat. Quit. Withdraw. 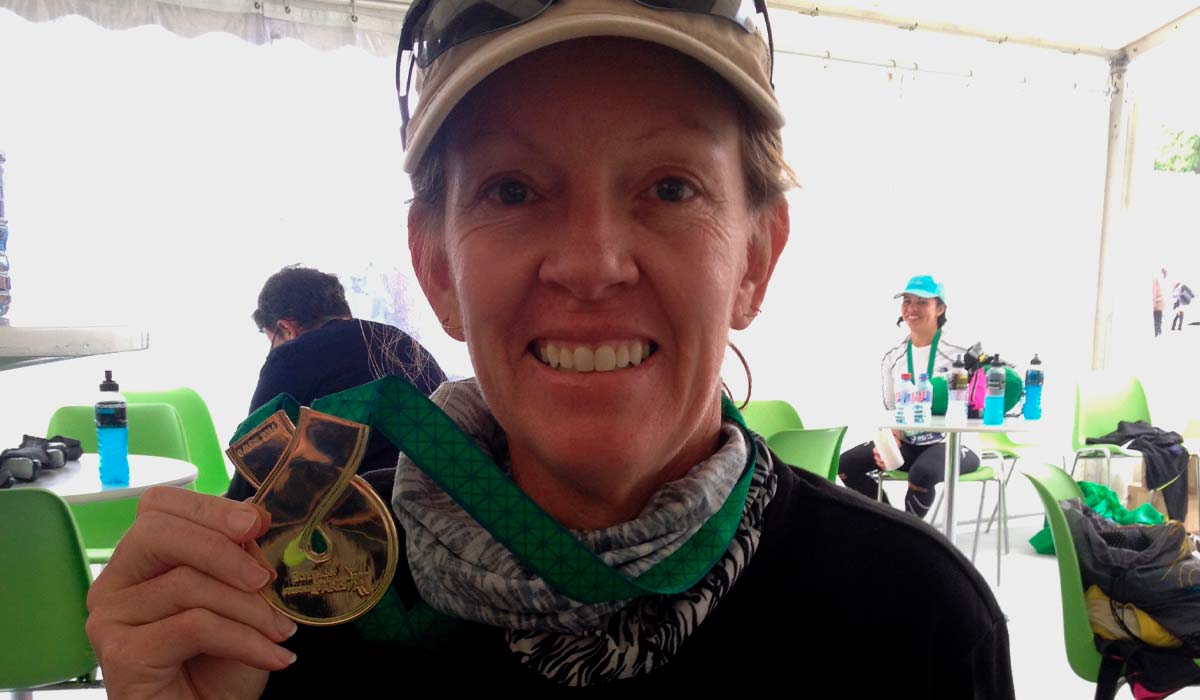 Fiona finished the Paris Marathon, despite tearing a hamstring 5 weeks before flying to France

Running is such a mental game, as much to do with training your mind as well as your body. One of the mantras I’ve used to get through long runs that hurt immeasurably is ‘I don’t quit, I don’t quit’. Another favourite is ‘the longer I go the stronger I get’. But I didn’t expect to use either of them while my running shoes lay dormant. ‘Keep Cool & Carry On’ written on my hand was one motivator to make it through my first half marathon.

That’s the thing about running. It lures you along its meandering path, coaxing you into facing challenges, seducing you with its highs, slapping you with its lows, all the while embracing you in its warm sweat-soaked arms. Now I get it.

I’d love to hear about life challenges you’ve faced and how you overcame them. Please leave a comment below. Fiona