As you’d expect from a reptile weighing up to 250 kg, giant tortoises are slow movers. Were it not for two dark beady eyes glaring at me from beneath an oversized shell, I might just as well be watching a boulder.

Bringing up the rear during a shore excursion, I plonk myself down a few metres from this extraordinary creature the size of a washing machine. I am absolutely mesmerised. 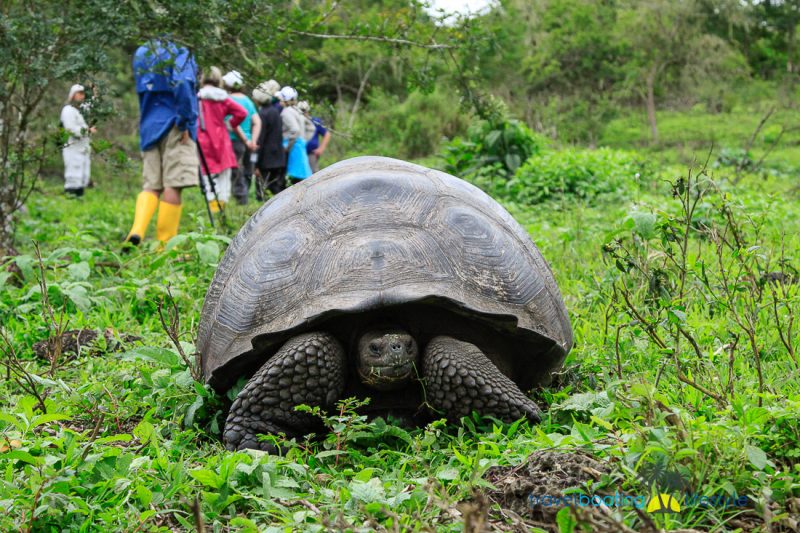 Seriously endangered, less than 20,000 giant tortoises remain in the Galapagos Islands. Centenarian Lonesome George became the environmental poster child for the archipelago before passing away in 2012.

Far enough away from civilisation, anticipation accumulates during the two hour flight from Quito like lip-smacking layers upon a newly iced chocolate cake. Straddling the Equator about 1000 km west of Ecuador, flying low on approach to Baltra Island, the Galapagos Islands eventually emerge from the Pacific Ocean. 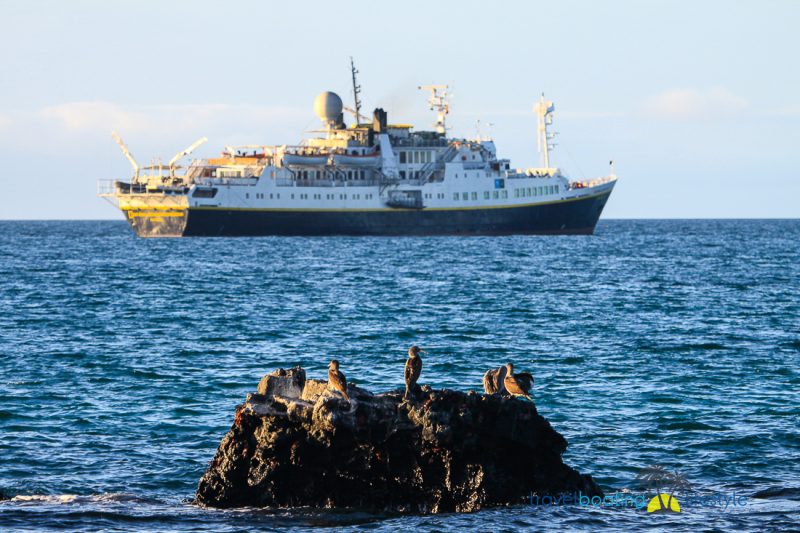 Disembarking at Seymour Airport on the flat featureless island, beyond the airstrip prickly pear cactus and a few random trees poke above scrawny saltbush. The sky is leaden grey while a cool wind whips tendrils of hair about my face. Devoid of the usual suspects you’d find on an island in the tropics, the archipelago’s charm is not immediately obvious.

I’m not the only one initially uninspired by these isolated yet ultimately enchanting, islands. Visiting in 1835 as a self-funded supernumerary on-board the Beagle, 23 year old naturalist Charles Darwin was underwhelmed, noting that ‘the black rocks heated by rays of vertical sun give the air a close sultry feeling. The plants smell unpleasantly’. Inspiration and revelation came later. He went on to change forever our view of the world, publishing his theory of evolution in The Origin of the Species by Means of Natural Selection. With so much splendid reading material available, my fellow voyagers are a knowledgeable lot, well-read in anticipation of a ‘once in a lifetime’ adventure. The excitement in the air is palpable as we board National Geographic Endeavour. Within hours of boarding our small expedition ship my initial reservations are dispelled.

Donning a mask, snorkel and wetsuit before sliding off the Zodiac and into the Pacific Ocean, I drop into a mercurial marine ballet as a pair of sea lions elegantly swoosh and twist their honey-hued bodies around me. I resist the urge to stroke the pelt as they glide past close enough that I’m drawn into their slipstream. Enormous brown unblinking eyes melt my heart. Slivers of sunlight pierce the surface, striking the carapace of a green turtle nearby picking at kelp swaying in the current. Cheeky penguins buzz my mask, flitting past swiftly in a blur of ascending bubbles left in their wake. They return relentlessly to offer me a lingering look at tiny pert bodies as they dart hither and thither. Iridescent rainbow-hued fish school in perfectly timed formation, changing course as if orchestrated by an unseen choreographer directing from stage left. The webbed feet of a pair of flightless cormorants dangle in my line of view.

Further afield blue footed boobies are dive bombing the sea for fish, their bodies streamlined into piercing arrows, vibrant blue feet tucked into their underbellies. With so much going on, and despite the chill in the water, it is the most extraordinary 30 minutes of snorkelling I’ve ever experienced. It turns about to fairly typical of each deep water snorkelling expedition. 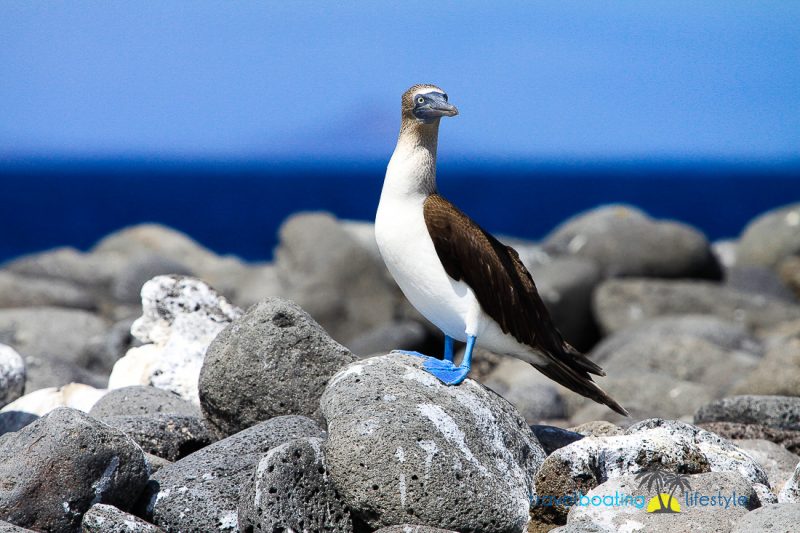 Lindblad Expeditions partners with National Geographic on 7 night cruises offering guests an extraordinary opportunity exploring a delicate ecosystem. Two different itineraries explore different islands, though both include a momentous Equator crossing. National Geographic Endeavour carries 96 guests in expedition style comfort with good sized cabins serviced twice daily. Most of the action takes place on Veranda Deck with the Lounge doubling as lecture theatre, with large screens showing videos and slides. It’s the main socialising area with comfy sofas and a bar manned by obliging staff. Outdoors is a swimming pool surrounded by deck chairs. The Bridge Deck has plenty of distractions when the ship is moving between islands with an extensively stocked library, gym, sauna, spa treatments and sun deck. Meals tend to have an Ecuadorian flare, as do the crew in fact, who are proud Ecuadorians keen to share their country’s fine attractions with visitors.

Shore excursions and on board lectures keep guests entertained as well as subtly educated on the archipelago’s unique ecology. To say the wildlife is exceptional is an understatement in the realm of declaring the moon to be far away. 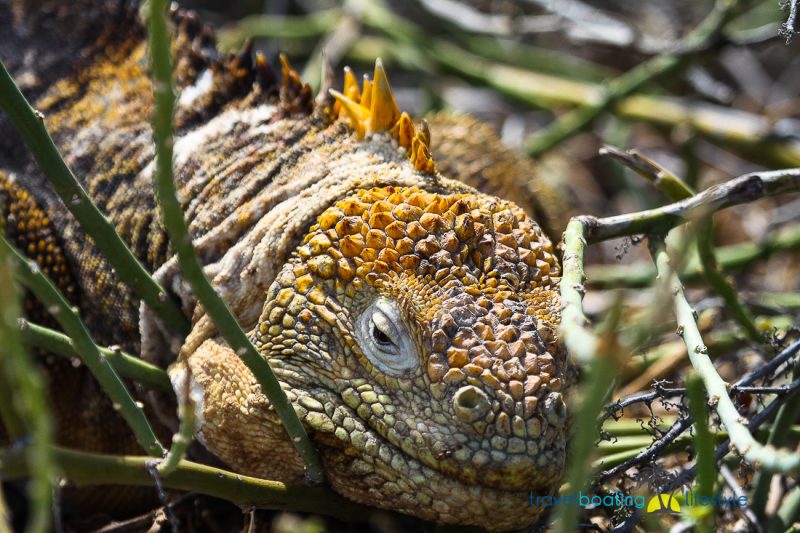 Marine iguanas for example, are found nowhere else on the planet. They’re also butt ugly. Darwin described them as ‘hideous looking’. He was spot on. Proving however that beauty is ultimately irrelevant, they’re also rather fascinating in a reptilian way.

Congregating in large colonies known as a mess of iguanas, they’d be right at home on the set of a Mad Max movie. With smashed in snouts concealing razor sharp teeth, heavily lidded eyes, a spiky dorsal ridge atop fat bellies covered in charcoal coloured scales, pretty they’re not. They’re not nearly as fierce as they look though. Unique ecological adaptations allow them to move comfortably between land and sea, surviving on marine algae but spending most of their time prostrate and unmoving in the sun. 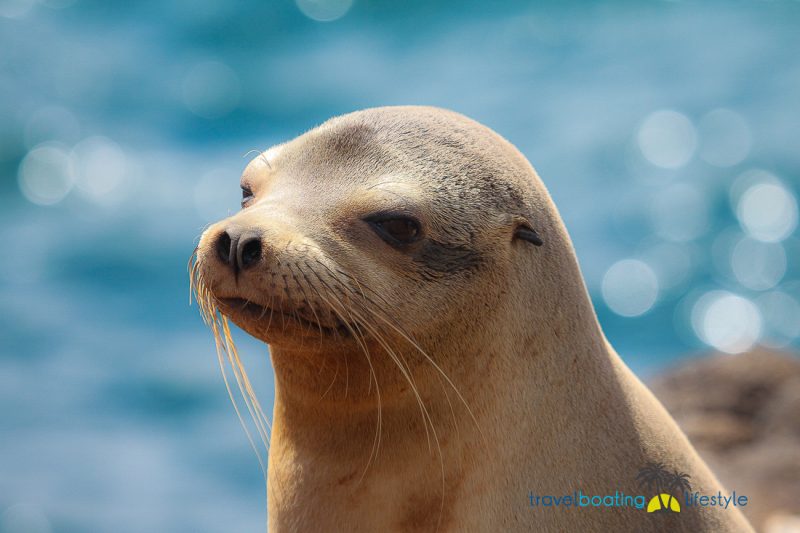 We step over lazing iguanas, around sassy sea lions and immobile giant tortoises, tiptoe past regal birds of prey and linger and laugh at foot-stomping dancing boobies each time we venture ashore. Sea lion pups a few weeks old romp in a tidal pool, a green turtle basks on inky black lava flows while scarlet coloured Sally Lightfoot crabs poke around crevices. They hold no fear of humans, so that it’s possible to sit in one spot amidst an endless vista of wildlife. The entire archipelago is protected under strict environmental control promoting tourism while providing sustainable income for the 30,000 or so locals. Heavily focused on protecting and preserving while showcasing this fragile environment, Lindblad Expeditions founder Lars-Eric Lindblad says, ‘we have a duty to pass the planet along to future generations in as unspoiled way as possible’.

So far that vision appears to be successful, offering visitors a rare opportunity into a world little changed through the centuries. This then is the true charm of the Galapagos Islands.