Sandbars and the Swan River

There’s an old saying amongst cruising sailors along the line that sailors fall into two categories: those who have run aground and those who are yet to. I readily confess to being a card-carrying member of the former. Though I won’t be admitting here just exactly how many times my keel has kissed the seabed over the years, like sex, you don’t forget the first time. Suffice to say, I’ve sailed in plenty of shoaling waters where a lifting keel, indeed no keel at all, would have been handy. The Swan River is such a place.

Don’t get me wrong, there is plenty of relatively deep water in the Swan, including a large expanse known as Melville Water where most boating action takes place. You just need to use common sense and observe the navigational beacons. That’s what they’re there for right? A lesson I learnt the hard way as a novice skipper many years back, yet to fully comprehend the significance of a South Cardinal mark. Nothing like an embarrassing grounding to incite one to brush up on one’s navigational skills.

Thankfully much of the Swan’s seabed is sand or soft mud. Snaking its way down from the Swan Valley in the Perth hills, the upper reaches are navigable to kayaks and the like. For sailors the real sailing starts west of the Narrows Bridge that links South Perth to the city. East of the Narrows it’s really only an option for dinghy sailors.

The Swan River looking across RPYC to Perth city

The only other overhead hazard between city and sea are the three bridges (two traffic, one rail) linking Fremantle with the north shore. These bridges mark the east limit of the Port of Fremantle’s Inner Harbour. The Swan River spills into the Indian Ocean beyond the inner harbour through substantial breakwaters. As it’s a major shipping port, the entrance and inner harbour are constantly dredged ensuring a safe haven for sailors regardless of ocean conditions. Sailors will find a straightforward passage into the river mouth, unlike some of the terrifying bar crossings endured to enter some east coast safe havens.

While the city of Perth may be one of the world’s most isolated, come a summer weekend, it seems the entire city is out on the water. Yachts large and small jostle for space, whether fleet racing, social racing or just cruising, sail and powerboats glide hither and thither. Yacht clubs aplenty line the banks, with most holding their own weekly regatta series adding to the cacophony. Occupying the headland at Pelican Point in Matilda Bay is the Mounts Bay Sailing Club alongside the rather swanky Royal Perth Yacht Club. Remember that silver urn known as the America’s Cup that was snatched from the clutches of the New York Yacht Club back in the 80’s? Though the original cup has long since departed the club trophy cabinet, it was a pivotal accomplishment for most Perth, indeed Australian, sailors. 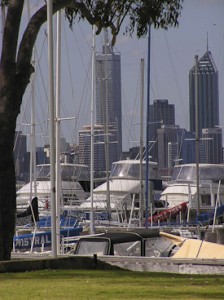 The Swan River foreshore looking across RPYC to Perth city

Matilda Bay itself, which lies below the cliffs of Kings Park not far from the CBD, has enough deep water to please most sailors. The river shoals markedly to the east though, before ending in reclaimed land that supports the Kwinana Freeway, offering city commuters a splendid view of crews who knock off work early to go sailing for Wednesday twilights.

Further westwards, Melville Water opens out into a wide open waterway lined with leafy suburbs like Applecross and Attadale on the south bank with Peppermint Grove and Dalkeith on the north. West of Melville Waters lays a couple of deep water, park lined leafy bays of Freshwater and Mosman Bay. Both are gorgeous spots to take the dingy ashore and picnic on the grass or to pop into Mosmans Restaurant housed in a restored boatshed. Or, better still leave the dinghy at home and dock alongside the jetty outside Mosmans while dining. Other notable waterfront restaurants with dock facilities are the Red Herring in East Fremantle and the totally revamped Raffles Hotel in Applecross.

Summer sailing conditions on the Swan are mostly dominated by the sea breeze known as the Fremantle Doctor. Predictably bustling in from the south west at up to 25 knots by mid to late morning, it’s the sort of brisk breeze that sailors and kite boarders adore and beachgoers loathe. Blackwall Reach is a narrow, cliff-lined stretch of water sure to challenge the arms of genoa trimmers and the brains of tacticians. Tacking into a gutsy sea breeze in this busy, narrow cliff lined channel is not the place for your crew to collapse with fatigue. Conversely, downwind runs through here are exhilarating as the sea breeze gains momentum in the confined space.

The reward for beating your way westwards is arriving at the cosy little cove beneath the cliffs of North Fremantle at Rocky Bay. Tucked out of reach of the sea breeze, it’s possible to anchor in close in the deepwater channel that runs alongside the cliffs. Presumably named Rocky Bay after the imposing limestone cliffs rather than the seabed makeup, there’s a rather large sandbar smack in the middle of the bay. For those in the know though, the South Cardinal mark is a dead giveaway as to its location.

Marinas
The Swan River has many marinas lining its shores. Most are private member clubs, though there are a couple, particularly around Fremantle, that are commercially run and therefore membership is not required to book a berth.

We’ve listed just a few of the options, but for a complete guide to marina locations and contact details visit the Australian Marinas Guide

Cant wait to visit Perth and the Swan River