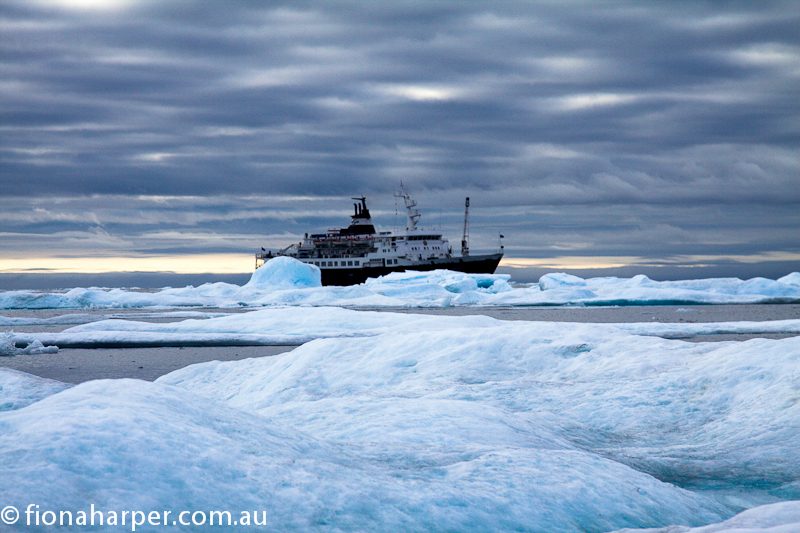 I’m astounded that a 100m expedition vessel can be simply cast adrift and left unmanned to float around the North Atlantic indefinitely. It seems nonsensical.

Any boat owner who has had the pleasure of leaving the shore behind on a bluewater adventure is well aware of the need to keep a constant lookout (well that actually applies to any boaty but it becomes particularly critical when short-handed on an extended passage). A piece of flotsam as large as a 100m vessel is any mariners nightmare. But an abandoned ship is also a concern for anyone who cares about the longevity of our planet and man’s wanton destruction of finite resources. Surely we can’t be so irresponsible to believe that it’s ok to just dump our stuff in the sea when we tire of it? Or are we?

Russian ice-class vessel Lyubov Orlova, named after a 1930’s Russian movie star, was previously contracted by  Canadian adventure tour company Cruise North as an Arctic expedition vessel taking travellers into Arctic waters. She ran into trouble after a dispute over crew wages who justifiably downed tools in protest while docked in St Johns, Newfoundland. The dispute was eventually settled but not before Lyubov Orlova was sold and slapped with a ticket to the great shipyard in the sky for scuttling.

Lyubov Orlova’s final voyage was to be to a Dominican Republic  scrapyard but the tow rope snapped (which seems an understatement when talking about industrial strength cables!) and Lyubov Orlova was abandoned off the Newfoundland coast and left to drift aimlessly.

Which, when you’re a ship without a Captain or crew doesn’t offer too many options than to drift with wind, tide and current, a serious hazard to mariners. But so too a significant hazard to the environment should she run aground, rupture her hull or ultimately sink. Filled with a cocktail of hazardous chemicals, sinking her at sea, as some would suggest as a suitable outcome, is a scenario that would have a significant impact on the marine environment.

She’s now a ghost ship, last spotted near the Irish coast, while everyone tries to duck responsibility for her final destination.

It seems incomprehensible that there is nothing of value on such a vessel that is worth salvaging. Why do I care? Lyubov Orlova was my Arctic home for eight days during one of the most extraordinary journeys I’ve been fortunate enough to experience. Following the route of intrepid Arctic explorers we journeyed into a landscape that appears now much as it would have done more than one hundred years ago when legendary seamen like Amundsen ventured into these waters.

Slipping through the Northwest Passage, with Lyubov Orlova’s  deck bathed in Arctic sunlight that dimmed but never quite disappeared, I spotted my first polar bear. Through my cabin porthole I glimpsed my first iceberg. On a windless pre-dawn steaming to an anchorage within a whisper of the North Pole, stars overhead twinkled upon a reflective sea. I stood in awe as the Northern Lights shimmered and danced across the southern sky casting an iridescent green glow. Call me a saltwater sentimentalist but I’m pretty sure all ships have a soul that you can’t ignore. Luv Ya All Over, as she was affectionately known, and the Arctic waters we shared remain in that little corner of my heart where special memories reside.

But I think what really bothers me about this story is the sheer waste that our disposable society permits. Do we care so little about recycling and reusing our finite resources that an entire ship is just another piece of unwanted junk?

Is there really no way that a significant vessel with all her fittings, fastenings and fixtures cannot not be utilised by someone? somewhere? some country?

With the continuing popularity of cruising and the  industry seeing significant new ship builds, it’s a problem that won’t go away. Do cruise companies consider this issue when commissioning new builds? Or are their business plans more short-sighted? What happens to all these swanky ships once their last passenger has disembarked and these aging old gals reach their use-by date? Will they too be abandoned, left to rot upon to the oceans they once cruised so elegantly?

What a waste. I am disgusted.

Cruising with the cargo in Tahiti

Could you live full time on a cruise ship?