Sleeping with rock star royalty at The Dorchester | United Kingdom 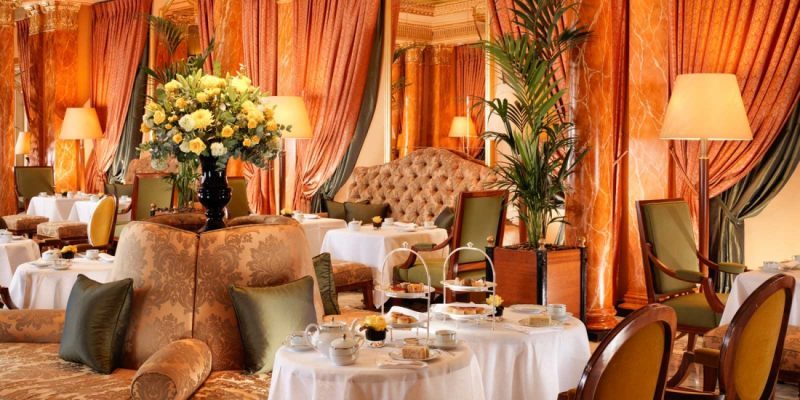 By her own admission Yvonna is not your average Butler. For a start she’s a gorgeous 20-something with a deliciously rich Polish accent, her slick blonde tresses restrained in a neat ponytail. Acquainting me with the concealed facilities within the Dorchester Suite I’ve checked into, Yvonna deftly dodges my questions about celebrity guests she’s attended. Though she does eventually let slip that I’ll be sleeping in the same king-size four poster bed once occupied by music industry royalty. With no further revelations, I allow my imagination to run unhindered, visualising Mick Jagger getting much satisfaction within the elegantly papered walls I’m briefly calling home. Or less likely, Jimi Hendricks, evicted from his flat down the road in the former Mayfair residence of Composer George Handel, presumably after neighbours tired of late night electric guitar jam sessions. 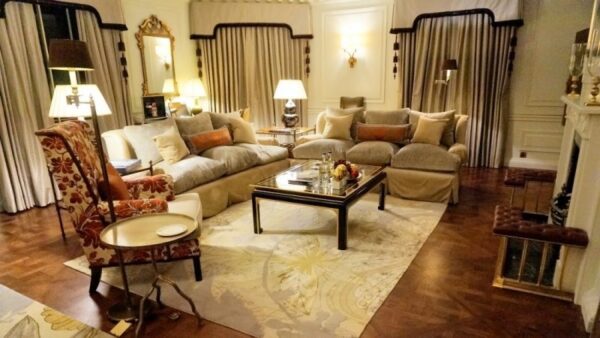 A bathroom big enough for the whole band!

The Italian marble bathroom has sufficient Bang and Olufsen gadgets to keep the geekiest guest amused along with a bathtub large enough to accommodate the entire Rolling Stones band. After checking the ice in a glinting silver bucket (chilling a bottle of Alain Ducasse brut, thanks very much) on the dining table, Yvonna breezily flits around the 125 square metre suite (larger than my 2 bedroom cottage at home), pointing out dual minibars concealed behind cabinetry, plumping cushions and flicking on lamps before whisking open drapes to reveal Hyde Park greenery glistening in spring glory. 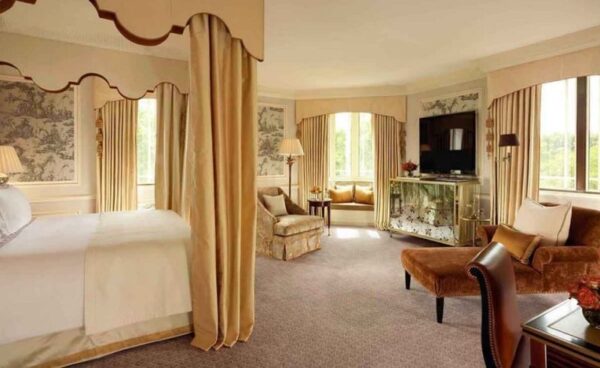 In the heart of sophisticated Mayfair, The Dorchester has been welcoming well-heeled guests since the 1930’s. It’s always been the kind of prestigious property that attracts the rich and famous, particularly those from the literary world attending Foyles Literary Lunches, which continue today. No doubt some of the hotel’s charm can be attributed to the gracious hospitality of impeccably groomed staff. They’re friendly yet discreet, happily far from haughty in a hotel that is consistently rated amongst the globes most prestigious. And they have guest recognition down to a fine art. 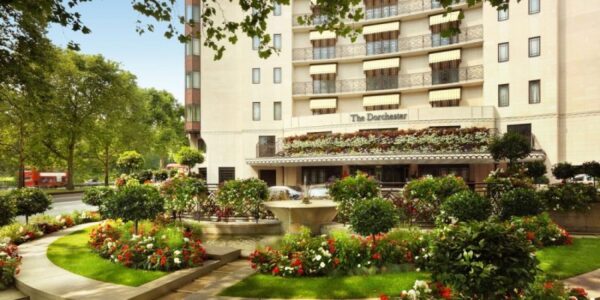 With a reservation for Afternoon Tea, before I’ve uttered more than hello, the Maitre d welcomes me into the plush gilded-ceiling enclave of The Promenade restaurant. She’s been expecting me. I’m swiftly whisked to an oversized chintzy settee with a table adorned with crisp linen, delicate crockery and dazzlingly polished silverware. If I owned a matching set of Hermes handbag and heels (I don’t), this is the place to flaunt them. There’s barely an empty seat despite it being mid-afternoon mid-week on a sunshine-dappled London afternoon.

An alluring selection of teas dominate the menu. Torn between The Dorchester’s own blend of Sri Lankan Ceylon and golden Assam malty caramel leaves and Ti Kuan Yin, a light Chinese Oolong tea with a hint of honey, I start with one and finish with the other. Afternoon Tea is a seemingly endless selection of finger sandwiches, warm scones dollopwed with richly clotted Cornish cream along with moreish French pastries. Naturally cucumber sandwiches make their ubiquitous appearance, though I’ve never quite understood their popularity. Befitting a hotel graced with a Michelin starred restaurant, these ones are delightfully tricked up with cream cheese on caraway bread. Though my favourite from a tiered platter that is constantly replenished are chicken with wholegrain mustard mayonnaise served on basil bread. 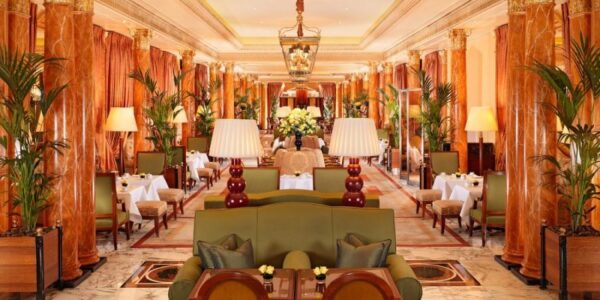 It’s easy to imagine High Society frocking up and dossing down at The Dorchester. It’s definitely an elegant Rock Star kind of hotel with a sophisticated Park Lane address. Though Yvonna is divulging little, I depart knowing I having rubbed shoulders, indeed my whole body, with rock star royalty.