Hovering between an aquamarine sea and paprika-tinted desert sands, the charismatic town of Broome is the southern gateway to West Australia’s  Kimberley region. Far from mainstream urban civilisation, Broome ticks along to its own heat-sodden beat. Sun-parched beneath a ridiculously cobalt sky, it’s ambling pace is one its main attractions.

No story about Broome should be told without mentioning famous Cable Beach. It’s a defining feature that has attracted water babies, travelers, sun-worshipers and naturists for eons. Indeed, my first visit to Cable Beach as a teenager in the 70’s, triggered a lifelong passion for sailing after a chance encounter had me sailing off into the sunset, bound for Darwin six weeks later. Cable Beach offers stunning sunsets, making late afternoon the perfect time to wind down from the tropical heat with a gin and tonic or similar in hand.

Broome is one of Australia’s prettiest beachside towns

For sailors heading to Broome, anchoring off the beach conjures up dreamy tropical sunsets, smooth gin-clear water and white sand that stretches for miles. No matter that there are far better anchorages in the Kimberley to the north, Cable Beach is one of those iconic locations. Comparable, celebrity-wise, to her media tart cousin in the Whitsundays, Whitehaven Beach for ‘most photographed’ status, it’s worth dropping the pick at Cable Beach for bragging rights alone.

The beach has attracted generations of sun worshipers mesmerised by the daily spectacle of a blood orange sun setting over an impossibly aquamarine sea. Back in the 1980’s, the ‘mung bung’ hippie lifestyle of Broome attracted an eclectic group of laid-back naturists, intent on doing, well, not much at all really.  The beach, then, as it is today, was the main focus. Days revolved around swimming and lazing on the beach, (part of the beach is still clothing optional), while nights were spent camping in the dunes. Not so for campers these days, with swanky resorts and tightly packed residential suburbs springing up behind the dunes. Despite the march of progress, the beach itself remains much as its always been. 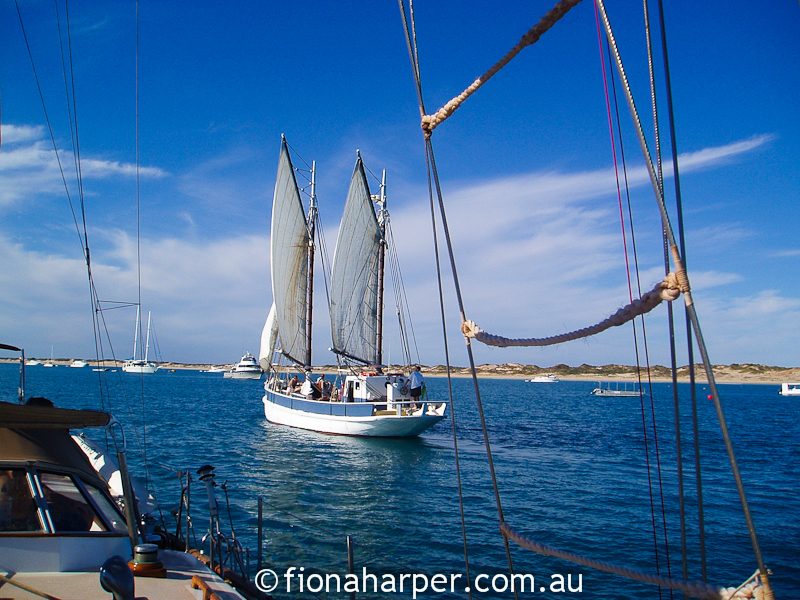 The traditional owners of the Dampier Peninsula that Broome sits upon, have lived from the land and sea, since ‘the land was soft’ according to Dreamtime stories. Their complex culture has undergone much evolution with the arrival of the white fella. Access to their traditional food and water resources were denied or limited, threatening their very survival.  First the European pastoralists arrived, followed by Asian pearlers. Violent clashes often erupted as Aboriginal people were taken into custody to provide labour for these soon to be thriving industries  In the early 1900s, Broome was renowned as the largest pearling centre in the world. Later the missionaries arrived, intent on brandishing their own form of enlightenment on these by now bewildered people. Meandering through Broome’s streets today reflects this mix of cultures and influences in its people and architecture. Indeed, this culture hotpot defines much of the town’s attraction to visitors.

In the absence of a marina, (despite local mariners lobbying for years), there are essentially two anchorages to choose from. With all the attractions of Kimberley cruising on its doorstep, Broome is the home base for a large charter and fishing fleet. The authors of West Australian Cruising mention that the challenges for yachtsmen arriving into Broome include refuelling, comfort, provisioning and access to shore. Sure, all of those challenges apply to mariners enroute to points north or south. What they omit though, is that Broome’s delights are well worth the inconveniences encountered. Remote, and smack in the centre of an inhospitable coast, Broome offers the closest thing to civilisation for over 2300km of predominately uninhabited land between Karratha and Darwin.
Approach is from the west, keeping well clear of a shoaling area marked by beacons off Gantheaume Pt.  Roebuck Bay anchorage is close to town, and therefore convenient for shore trips for doing shopping and laundry.  However, this bay is subject to the easterlies that whip up an uncomfortable fetch.  Rounding Entrance Pt, keep clear of the enormous towering structure that is the main shipping wharf. Whilst passing this monolith, take a moment to visualise the challenges that refuelling involves. This daunting structure provides access to the only refuelling point. Horror stories abound of yacht rigging becoming entangled in the wharf structure as yachts wrestle with fresh breezes and with enormous tidal range while berthed. 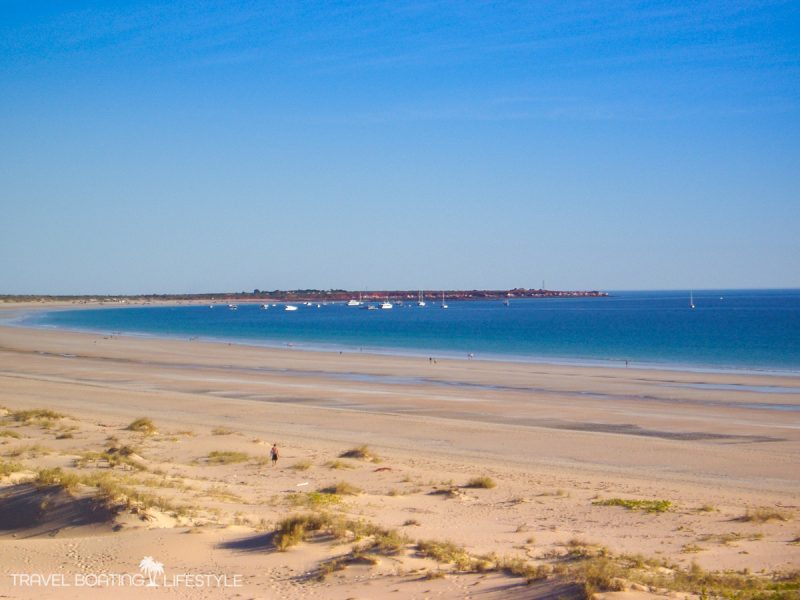 Tides that can range up to 10 metres during springs mean it is difficult to anchor close to shore in Roebuck Bay.  The water literally disappears from this anchorage:  catamarans are often seen drying out on the mud, with their owners taking the opportunity to clean their hulls. There are many moorings in the bay, which are used by the large commercial fishing and pearling fleet.

The alternative anchorage is at Gantheaume Pt, at the southern end of the aforementioned Cable Beach. Mostly, charter boats have laid permanent moorings here to use as their dry season base. It’s possible to anchor most anywhere along the vast expanse of beach south of the main resort area, the only real navigational hazard being the reef-strewn area north of Gantheaume Pt. 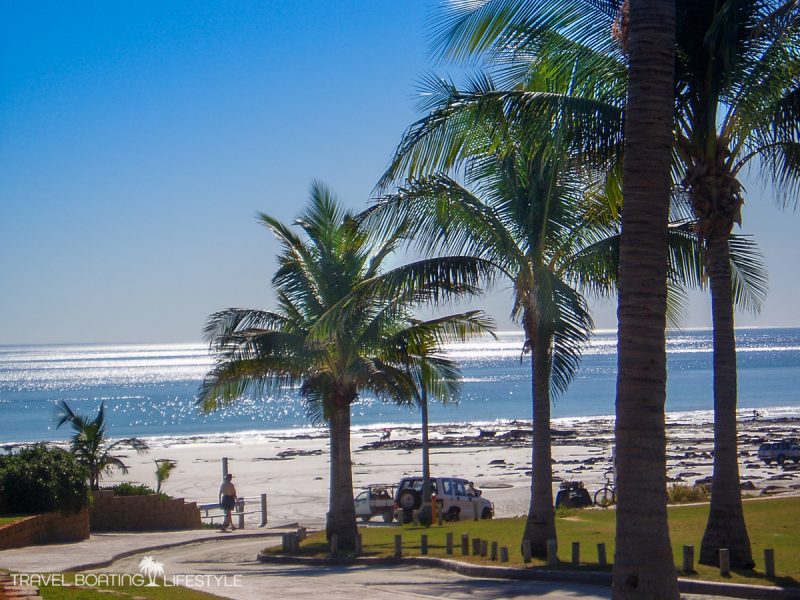 The tropical cyclone season officially begins in November and ends at the end of April.  Known as ‘the wet’ this is definitely the wrong time of year for sailors to head to Broome. Cyclone shelter is pretty limited, with the only real option being to tuck deep into the mangrove creeks, where some protection is afforded from destructive winds and tidal surges.

The dry season from May to October will usually find easterly (offshore) winds, low humidity and daytime temperatures in the high 20’s to low 30’s (degrees Celsius). 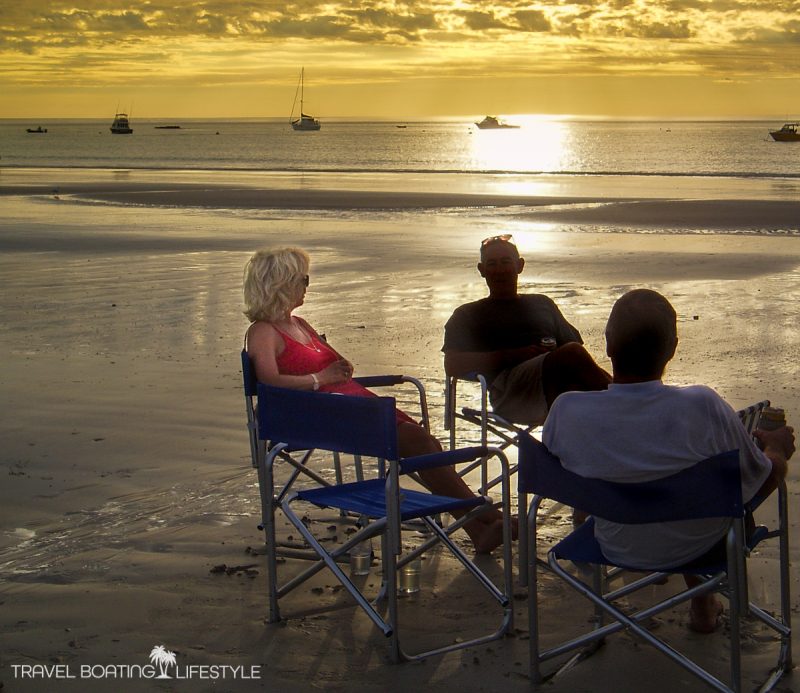 Where to obtain fuel, water or provisions
The Broome wharf provides fuel and water for vessels of any size.  As noted earlier, the wharf is geared towards large ships and can be troublesome for small vessels tying up alongside.

There are a number of city-sized supermarkets in the town, along with most other services of a major centre. Thanks to the vibrant marine industry, there are also plenty of marine services available for repair or maintenance. An efficient bus service runs throughout the town, however neither anchorage position mentioned above is on the bus route.  Taxis are available.

Recommended reading    Western Australia Cruising, Fremantle Sailing Club
Broome Visitor Information Centre
Information contained in this article should be used in conjunction with current nautical charts and aids.  Whilst every endeavor has been made to ensure all information is correct at the time of writing, the author cannot accept responsibility for omissions or inaccuracies.

Hi Fiona, I am writing my second novel and research is all important. What a pity we have to grow old. What a wonderful place that is and i have never been there at all.Too late for me but I enjoyed reading your bits about Broome and yachting. Good on you! Liz Gablonski.

HI Liz, yes indeed growing old is tiresome! So long as we remain healthy aging is only a number that we sometimes have to trot out to officaldom. Good luck with your novel – what an awesome accomplishment. Fiona